Those resigning have complained of Kurdish dominance and come after a series of defeats at the hand of ISIS reports Al-Modon. 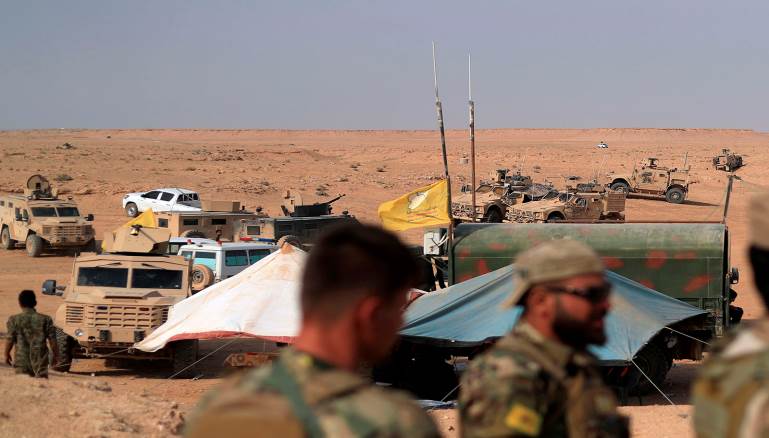 After the progress achieved by the Islamic State (ISIS) in repulsing the Syrian Democratic Forces (SDF) in the Hajin desert in the Deir ez-Zor countryside, problems have grown between the SDF’s Arab and Kurdish components, according to Al-Modon correspondent Nawras al-Arfi.

The Arab component, represented by the Deir ez-Zor Military Council, lost about 100 people in the recent battle, and dozens of the bodies of fighters were burned and mistreated by ISIS. Dozens of fighters from the Council were also captured and dozens more wounded, amid a state of neglect and a lack of necessary healthcare. Before this, Arab commanders were marginalized and the supreme word was given to Kurdish commanders. The recent battle was led by the Kurdish SDF leaders, not Arabs, which was a change to what had occurred previously, when the assault started and the SDF was able to crush ISIS east of the Euphrates.

The marginalization pushed the Deir ez-Zor Military Council head, Ahmed Abu Khoula, to resign from his position two weeks ago. His resignation was kept secret, in an attempt by the SDF to contain the matter until the end of the battle, which was not proceeding in line with the SDF’s plans. The news of the resignation spread on Tuesday along with a number of Deir ez-Zor Military Council figures leaving their weapons, and accusations against Kurdish SDF leaders that they were throwing themselves into a furnace on the frontlines against ISIS. They also said that all the dead were Arabs, and the Arabs in the SDF accused the Kurdish commanders of claiming victory for themselves when the battle has been going well, while marginalizing the Deir Ez-Zor Military Council and its Arab fighters. The Arab fighters began to put pressure on their leaders to resign and to pull back to the al-Shaitat villages.

Amid the confusion in the SDF, ISIS has been able to advance and take control of new areas, in an attempt to reach the areas under its control in the eastern Euphrates in the Albu Kamal desert by the Syrian-Iraqi border, opposite the al-Baghour village. Iraqi planes have continuously dropped fliers in which it warns ISIS against approaching the border.