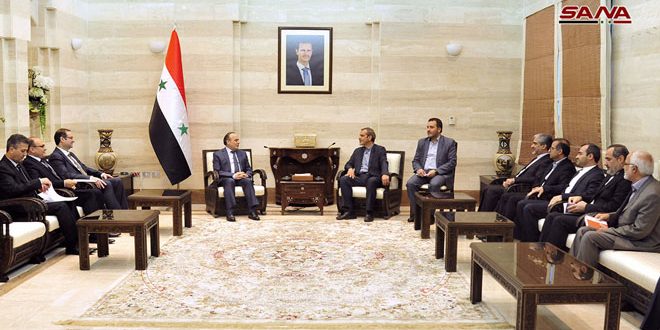 On Tuesday, Prime Minister Imad Khamis met an Iranian economic delegation, headed by Hassan Danaiefar, the Advisor to First Vice-President of the Islamic Republic of Iran and Chairman of the Iranian Committee on the Development of Economic Relations with Syria and Iraq.

During the meeting, the two sides discussed the prospects of developing economic relations and activating investment projects and partnership between businessmen from the two countries and the necessary steps to increase trade exchange.

Khamis said that the deep-rooted and distinguished political relations between Syria and Iran constitute a solid basis for the promotion of economic relations, which is witnessing remarkable development.

He also called on Iranian companies to invest in Syria. Danaiefar, in turn, pointed out that the economic cooperation between Syria and Iran is on the right track. He added that a number of joint projects were discussed during the visit.

Khamis met with a number of political and media figures participating in the 2nd Syrian Media Festival which was launched on Monday under the title of “Victory Tale” at the Damascus Opera House.

Talks during the meeting focused on the need to raise the media discourse to reflect the concerns and aspirations of the Arab people and uncover all forms of conspiracy against the Arab nation.