Russia and Iran have complained that they were not consulted while the list was being formed reports Al-Araby al-Jadeed. 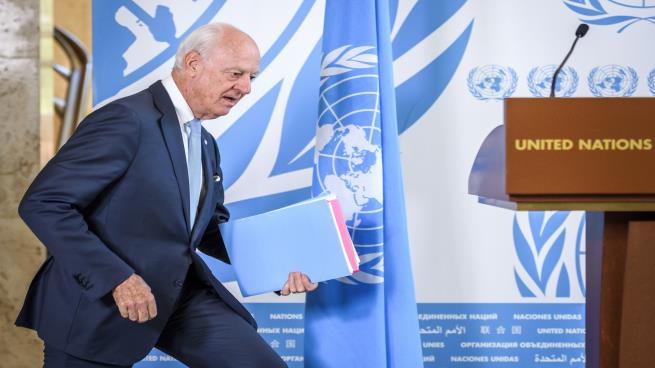 Al-Araby Al-Jadeed has learned from its sources that disputes, which occurred in meetings yesterday between the three guarantor countries of the Astana process — Turkey, Russia and Iran — focused primarily on the objections of Iran and Russia to the list of independents for the constitutional committee prepared by the UN Special Envoy to Syria, Staffan de Mistura.

According to informed sources, Russia and Iran rejected the list which Mistura prepared, and which is the third list submitted for the formation of the constitutional committee, after the regime and the opposition submitted two lists, with each composed of 50 names. Mistura’s role was to form the third list of 50 names of independents, experts and representatives of civil society groups, according to the outcomes of the Syrian National Dialogue conference in Sochi at the end of January.

According to the outcomes of the Dialogue conference, Mistura had to consult the three guarantor countries while preparing the list, and this was not done, according to the Russian and Iranian delegations. According to the sources, Mistura prepared the list without returning to these countries, and tried to impose it on them.

Mistura presented the list during the last Sochi meeting with the Astana formulation, which was held on Jul. 30 and 31, 2018, and asked the guarantor countries to study the list and discuss it at the current meeting in Geneva. The third list was supposed to have been chosen from a group of proposed names put forward by the guarantor countries, which Russia and Iran did not see enough of in the list that was proposed.

Based on this, a technical committee will be proposed to form the third list, which means that the current Geneva meeting may not yeild any results in regards to the constitutional committee, while waiting for a similar meeting to be held later, with the date and location unknown, or it may be determined at the end of the meetings.

On Monday, the three guarantor countries held preparatory technical meetings to discuss the issue of the constitutional committee and the implementing the outcomes of the Syrian National Dialogue conference in Sochi at the start of the year. The meetings were held at the invitation of the United Nations. Delegations met at the headquarters of the Russian mission in Geneva on a bilateral basis, ending with a tripartite meeting, with the exception of the meeting of the Iranian and Turkish delegations, which was held at the UN headquarters.