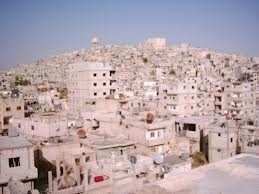 Beirut, Asharq Al-Awsat – An Alawite activist revealed that families living in the “Mezze 86” district, in the south west of the Syrian capital Damascus, are fearing retaliatory measures in the event of the fall of President Bashar al-Assad’s regime. He told Asharq Al-Awsat that “the Alawites in this district, which largely consists of slums, are living in a state of fear and caution, waiting for how things will unfold”.

The residents of the district, according to the Alawite opposition activist speaking under the condition of anonymity, “had deluded themselves at the beginning of the revolution into thinking that the regime would resolve matters. As for now, they fear that the al-Assad regime could fall at any moment and they are worried about the reprisals and acts of violence against them”. The activist said that his fears, and likewise those of the other residents, came to prominence “after the district turned into a stronghold for the Shabiha and supporters of the regime. This led to a sense of anger among Damascus residents, given the Shabiha’s behavior towards some residents of Mezze 86”.

The presence of barriers at the entrances to the district, erected by so-called “popular committee” groups, led to restrictions being placed upon non-Alawite residents, whereby “they would be searched and sometimes insulted”, according to the Alawite activist. He also confirmed that “these groups, supported by the air intelligence force, were responsible for getting residents of the neighborhood involved in the problems of neighboring districts. They recruited young men, armed them and took them to locations where demonstrations were being held, in order to commit acts of repression and murder”. He pointed out that “these acts may result in reprisals in the event of the fall of the regime, which will happen sooner or later”. He called upon the “Syrian opposition, represented by the Syrian National Coalition, to develop mechanisms for the protection of these districts, in order to avoid a lot of bloodshed the moment the al-Assad regime falls”.

“Mezze 86” lies on one of the surrounding hills of the Mezze district of Damascus. It is a desolate hill that was once home to the military barracks of the “Defense Brigades”, led by Rifaat al-Assad, brother of the late President Hafez al-Assad. The name Rifaat al-Assad evokes terrible memories for the Syrians, especially with regards to the Tadmor massacre.

In the early 1980s, following the Syrian regime’s repression of the Muslim Brotherhood in the district, Rifaat al-Assad allowed his men to build accommodation for themselves. Soldiers, the vast majority of whom were Alawites, quickly flocked to “Mezze 86” with their wives and children, living in houses constructed of mud bricks and sheet metal, using water and electricity from the public grid, and building primitive sewage systems feeding into a valley close by.

“Mezze 86” has recently been exposed to a series of bombings claiming the lives of a number of residents. The Syrian opposition has accused the al-Assad regime of being behind these measures in an attempt to intimidate the Alawite minority. The district hosts around 200,000 people, and its sheet metal houses have now transformed into buildings, some of them five stories high, but still built with the mentality of a shantytown; without a license and with illegally procured water and electricity, and overlooking narrow streets and alleys. Although the Alawites still represent the majority of residents, other communities have begun to move to “Mezze 86” and now constitute a considerable proportion of the population there.