Female volunteers are joining the so-called the National Defense Forces, which gather together existing popular committees of pro-regime civilian fighters under a new, better-trained and armed hierarchy. 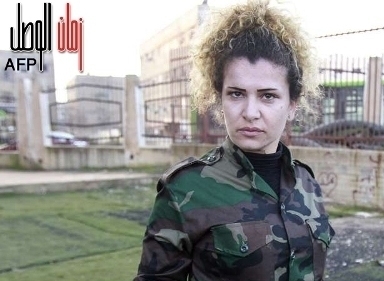 Abir Ramadan, a technical assistant, joined the National Defense Forces (NDF) in the city of Homs to become one of the guerrilla fighters who offered their loyalty to President Bashar al Assad against the Syrians who seek to oust him from office.

In a military camp in Wadi al-Zahab, Abir marches with other fellow female fighters and chant “Only God, Syria, and Bashar.”

The camp is guarded by a group of women armed in Kalashnikovs who call themselves fidaiyat (Guerrilla fighters), a name that once was appealing for being linked with the Palestinian guerrillas who fought for liberating their country from the Israeli occupation.

Abir says that her husband has encouraged her to join the NDF. She adds, “Before joining the NDF I never learned how to use the weapons and never dared to stay alone at home. But now I volunteered because emy homeland is wounded, and I will benefit and be useful.”

Abir still goes to work, and coordinate with her fellow colleagues to do both.

The first semi-military unit comprises 450 female fighters who range between 18 and 50 years old.

Retired (wman) Major Nada Jahjah said that this war is different from all other wars that we had, because the enemy is or people and neighbors, supported by foreign countries and by the tyrannical imperialism which provide them with arms and radical thought.”

President Bashar al-Assad's regime has put together a new paramilitary force of men and women, some trained by key ally Iran, to fight what is now becoming a guerrilla war, activists said Monday.

The force, dubbed the National Defence Army, gathers together existing popular committees of pro-regime civilian fighters under a new, better-trained and armed hierarchy, the Syrian Observatory for Human Rights said.

The popular committees were originally formed to protect pro-regime neighborhoods from rebels.

"The (regular) army is not trained to fight a guerrilla war, so the regime has resorted to creating the National Defense Army," said Observatory director Rami Abdel Rahman.