Mouaz al-Khatib, President of the Syrian National Coalition, the biggest opposition umbrella, generated an outburst of contradicting responses when he announced that he is ready to negotiate with the Syrian regime under two conditions: releasing more than 160,000 prisoners, and renewing passports to all Syrians in exile. 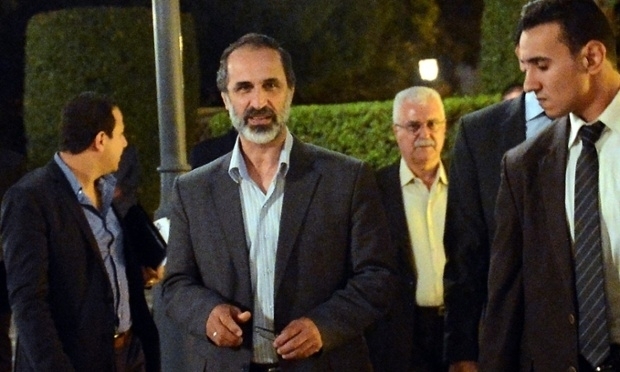 Mouaz al-Khatib, President of the Syrian National Coalition, the biggest opposition umbrella, generated an outburst of contradicting responses when he announced that he is ready to negotiate with the Syrian regime under two conditions: releasing more than 160,000 prisoners, and renewing passports to all Syrians in exile.

Khatib did not mention Assad’s stepping aside as a pre-condition.

Almost immediately, the Syrian National Council, a member group of the Coalition, which is dominated by the Muslim Brothers, issued a statement criticizing Khatib’s statement

In his statement which he published on his Facebook page, Khatib said, “I learned from the media that the Syrian regime has called the opposition to start dialogue, and has designated PM to oversee this project. (I also learned that) the Minister of Interior is calling on the opposition leaders to return to Syria.”

Khatib said that “there is no confidence n the regime,” but added, “Since the revolution is going on, and since the Syrian citizen has become in an unprecedented crisis, as a goodwill initiative, I announce that I am willing to sit down with representatives of the Syrian regime in Cairo or Tunisia or Istanbul to search for a political resolution to the crisis, and to arrange matters for the transitional phase that could prevent more blood.”

However, Khatib coupled his offer with two demands: the release of what he described as 160,000 prisoners held by Mr. Assad’s government and the renewal of all expired passports held by Syrians abroad — a gesture apparently aimed at disaffected expatriates and exiled opposition figures who could not return home even if they wanted to.

Responses varied from supporters who commended the imitative to those who condemned it and accused Khatib of violating the consensus in the Coalition.

The Syrian National Council issued a statement in which he said that Khatib’s remarks “contradict the Coalition Status and the Doha Document which absolutely rejects any negotiations with the regime.”

The statement added that the people is still paying a very high price for attaining his right to the complete freedom and to entirely get rid of the regime.”

But other activists and intellectuals supported Khatib’s initiative in posts and statements they published today.

A group of intellectuals issued a statement to call on the Coalition leadership which is to meet today to refuge to the reason rather than the emotions.

The statement, which was signed by a group of writers, movie directors, and intellectuals, said the regime “will most likely reject the initiative, and …. The Syrians will lose nothing if you adopted the initiative, while the regime is the one that will lose,” calling to “leave the ball in the regime’s court.”

The hard-liner lawyer Haytham al-Maleh criticized al-Khatib for his initiative and said that the Coalition will “reproach him” him for the imitative which does not “oblige us.”

On the other hand, Samir Aitah, Member of the Syrian Democratic Forum, described Khatib as a “courageous man, who came up with this initiative to bring something new to his people.”

There was no immediate response by the Syrian government to the statement by Sheik Khatib.