The killing of al-Bouti exposed the deep division within the Syrian society. while many activist reminded of al-Boutin's full support to the regime and his call to kill rebels, other Syrians regarded him as a "saint." 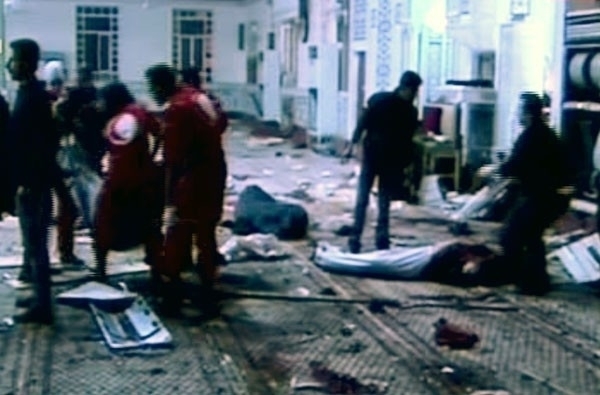 A suicide bomb attack on a central Damascus mosque on Thursday killed 42 people, including Syria's most prominent pro-regime Sunni cleric, and wounded dozens of others, AFP quoted the Syrian health ministry as saying.

The attack came as heavy fighting raged across Syria, and UN Secretary General Ban Ki-Moon said the United Nations would investigate whether chemical weapons have been used in the conflict.

The bomber blew himself up inside the Iman Mosque as the cleric, Mohamed al-Bouti, addressed religious students, in an attack that echoed sectarian violence in Iraq, AFP reported.

The killing exposed the deep division within the Syrian society. while many activist reminded of al-Boutin's full support to the regime and his call to kill rebels, other Syrians regarded him as a "saint."

"The number of those martyred in the terrorist suicide attack in the Iman Mosque rises to 42 martyrs with 84 injured," state television said, citing the health ministry.

Bouti was the most senior pro-regime Sunni cleric in Syria whose weekly addresses at Friday prayers were frequently broadcast live on state television.

His death will be a blow to the regime of President Bashar al-Assad, which has been fighting an insurgency that flared when his forces launched a bloody crackdown on Arab Spring-inspired democracy protests that erupted in March 2011.

The relentless violence has killed tens of thousands of people and caused more than one million to flee their homes as refugees.

Pro-government television aired gruesome footage from inside the mosque, where dozens of corpses and body parts, including limbs and hands, were strewn on the carpeted floor among pools of blood.

Emergency workers collected the remains and carried them out in grey body bags.

Ahmed Moaz al-Khatib, the head of the umbrella opposition National Coalition, condemned the cleric's killing as a "crime," and suggested the regime could have been be behind it.

"We categorically condemn the assassination of the scholar Dr Mohamed Saeed Ramadan al-Bouti," Khatib told AFP in Cairo by phone.

"This is a crime, by any measure, that is completely rejected," he said. "Whoever did this was a criminal… and we suspect it was the regime."

Khatib, himself a cleric, said he had known Bouti, who was held in high esteem among Islamic theologians, but had disagreed with him over his vociferous support for Assad.

Born in 1929, Bouti was from a large Kurdish family and spent years studying Islam, including at Cairo's al-Azhar University.

He was reviled by the opposition, and frequently lashed out against the rebels while encouraging Syrians to join the army to fight against them.

The regime is dominated by members of the minority Alawite sect and had relied in part on the cleric to bolster its claims to represent all Syrians, including Sunnis, from whom the opposition draws much of its support.

The attack came as fighting continued throughout the country, with rebels reportedly gaining ground in the Golan Heights, which is partly occupied by Israel.

"It appears that the rebels launched coordinated attacks on multiple parts of the Golan, taking control of areas and villages in the province of Quneitra," said Rami Abdel Rahman of the Syrian Observatory for Human Rights.

But state media reported the "armed forces restored security and stability to the towns of Al-Talal al-Hamr and Khan Arnaba (in Quneitra) after eliminating several Al-Nusra Front terrorists."

Lebanese security sources said about 220 Syrians, including some wounded, had crossed over from southern Syria in the past 24 hours.

Louay Moqdad, a spokesman and coordinator for opposition forces, acknowledged some nations had began training rebels, but declined to provide further details.

At least 120 people were killed in Syria on Thursday, according to an initial Observatory toll which was expected to rise sharply with the additional deaths in the mosque attack.

A presenter on the channel said a suicide bomber had entered the mosque and blown himself up.

The opposition condemns the murder

Syria's opposition chief Ahmed Moaz al-Khatib condemned the attack as a "crime", saying he suspected the regime was behind the attack.

"We categorically condemn the assassination of the scholar Dr Mohamed Saeed Ramadan al-Bouti," he told Agence France Presse in Cairo on the phone. "This is a crime by any measure that is completely rejected."

Khatib, himself a cleric, said he had known Bouti, who was widely esteemed for his erudition in Islamic theology, but had disagreed with him over his vociferous support for Assad.

"Our religion and values do not allow to treat differences of opinions through killings," he said.

Bouti was the most senior pro-regime Sunni cleric in Syria, and his weekly addresses at Friday prayers were frequently broadcast live on state television.

After news of the attack broke, one state television station interrupted its regular program to broadcast verses from the Koran, the Muslim holy book as well as footage of Bouti giving his weekly sermon.

Bouti, who comes from a major Kurdish family, was reviled by the opposition, and activists say he was forcibly ejected from a mosque in 2011 after saying most of the people who went out to protest after Friday prayers did not know how to pray.

He was born in 1929 and spent years studying Islamic theology, including at Cairo's al-Azhar University, according to state television.

Syrian News Agency SANA gave a brief bio of al-Bouti. It said  al-Bouti was born in 1929. He accomplished his Sharia Baccalaureate certificate at the Islamic Tawjih Institute in Damascus.

In 1953, he joined al-Sharea Academy at al-Azhar University and acquired the global certificate in 1955, then he got a diploma in education in the same year. He was appointed as a teacher in Al-Sharea Academy at Damascus university in 1960, then he was delegated to al-Azhar university to get the doctorate in the Islamic Sharea Originals and got it in 1965.

In 1965, he was nominated as a professor in al-Sharea Academy at Damascus University in 1965, then a dean and chairman of the religions sector at the University.

In 2012 he was nominated as President of the Levant Scholars' Union.He is Member of the Higher Council of Oxford Academy. He wrote more than 40 books in the sciences of  Sharea, literature, philosophy, society and civilization.

Ministry of Awkaf ( Religious Endowments ), Syria scholars, intellectuals, teachers and the Levant Scholars' Union announced the death of scholar al-Bouti who was martyred while giving a religious lesson in al-Iman mosque.

"The malicious hands of traitors killed the great Scholar because he was the voice of Syria, the right of Syria and the image of Syria.. they targeted his body, but they didn't target his mentality or spirit," Minister of Awkaf  Mohammad Abdul-Satar al-Sayyed said in a statement.

Syrian government.. The coward act would not pass without punishment

The Syrian government said that the coward and malicious act which targeted Scholar al-Bouti will not pass without punishment, adding "those who perpetrated the act are sinners until the day of Resurrection.. the teachings of  Late scholar, his sciences and morals will remain as a torch for the honest souls which rejected humiliation."