President Bashar al-Assad on Sunday received a delegation representing Lebanese national parties, forces and figures, discussing with them developments on the Arab and regional arenas in general, and developments in Syria and Lebanon in particular. 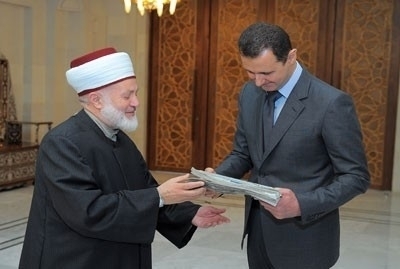 resident Bashar al-Assad on Sunday received a delegation representing Lebanese national parties, forces and figures, discussing with them developments on the Arab and regional arenas in general, and developments in Syria and Lebanon in particular.

President al-Assad said that situation in Syria is improving due to steadfastness of the Syrian people and their rallying around the Syrian Army, stressing that there can be no reconciliation with Takfiri and terrorist groups and that Syria will sternly confront terrorism in all its forms in parallel with the government's work to implement the political program for resolving the crisis.

President al-Assad stressed that Lebanon's strength isn't in its weakness, but rather it's actual and real strength,  pointing out that the political, cultural and social wealth and diversity of Lebanon and Syria bolster them in the face of the intellectual invasion targeting the region and helps them foil the foreign plots that seek to create a new Sykes-Picot which divides the region on sectarian and ethnic basis.

He pointed out that the events currently taking place in the Arab arena assert the need for unifying and inclusive ideas and concepts, noting that Syria and Lebanon have always been pioneers in creating and bolstering such ideas, particularly through nationalist, pan-Arab and Nasserite parties, which contributed greatly to spreading and bolstering pan-Arab nationalist sentiments.

President al-Assad said that this role needs to be invested now more than ever to face attempts at division targeting the region.

For their part, members of the delegation affirmed that the Lebanese people are committed to Arabism and the resistance, saying that what Syria is facing targets the entire Arab nation, and that all the Arab people should be involved in foiling the plots targeting Syria's pan-Arab role and its civilized and moderate Islam.

They asserted that Syria will remain the home of resistance and its host and defender, adding that the martyrs of the Syrian people and the Syrian Army represent the pride and dignity of the Arab nation.