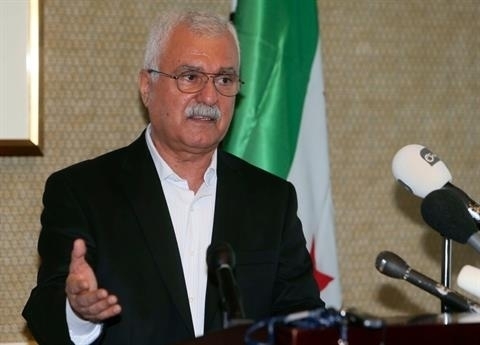 Sabra "was assigned today to carry out the functions of the head of the Coalition until elections for a new president," one of the Coalition's main constituent groups, the Syrian National Council, said in a statement.

The announcement came a day after the widely respected Khatib submitted his resignation for a second time, officially in protest over the failure of the international community to stop the conflict in Syria, which has killed at least 70,000 people.

Sabra, who until now led the Syrian National Council, will be the Coalition's caretaker leader until at least May 10, when the Coalition is scheduled to meet for leadership elections.

Khatib's resignation came less than a month after he first announced he was stepping down from the presidency of the Coalition, which has struggled with internal divisions and the rivalry between key backers Saudi Arabia and Qatar.

The grouping was founded in Doha last November and has since been recognised by dozens of states and organisations, including the Arab League, as the legitimate representative of the Syrian people.

But it has faced persistent accusations of impotence and detachment from the situation on the ground in Syria, where fierce fighting continues to kill dozens of people daily.

Sabra is a respected veteran dissident, who was jailed for eight years under the rule of President Bashar al-Assad's father and predecessor Hafez, and detained twice — for a month and then two months — after the uprising erupted against Bashar in March 2011.

Sabra was freed in September 2011, and immediately went into hiding before secretly leaving Syria in early 2012.

In November 2012, shortly before the Coalition was formed, he was named president of the Syrian National Council — a key member of the Syrian opposition.

A Christian and long-time communist, his prominence within the opposition is seen as a strong message to the international community of pluralism on the rebel side.

He was born in Qatana near Damascus in 1947 and studied geography, going on to teach in the United States.