Syrian opposition and pro-government websites reported on Monday that U.S. Senator John McCain had made a brief visit into northern Syria to meet with political and military opposition leaders 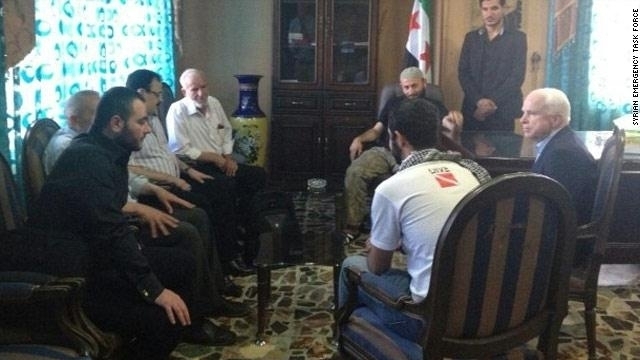 Syrian opposition and pro-government websites reported on Monday that U.S. Senator John McCain had made a brief visit into northern Syria to meet with political and military opposition leaders.

The Hill, a website that covers U.S. Senate activities, confirmed the visit, quoting a spokesman for the Arizona senator.

McCain's visit makes him the highest-ranking U.S. official to enter the country since its civil war began two years ago.

The story was first broken by The Daily Beast news website which reported that McCain met with General Salim Idriss, the leader of the Supreme Military Council of the Free Syrian Army, and spent a few hours in the country after entering through Turkey.

CNN and Politico confirmed the visit with McCain's office.

McCain has previously asked the Obama administration to increase support for the Syrian rebels, calling for "game-changing" action to end the civil war.

“We need to have a game changing action,” McCain told Fox News Sunday earlier this month.

“And that is no American boots on the ground, establish a safe zone, and to protect it and to supply weapons to the right people in Syria who are fighting for obviously, the things we believe in.”

Many Syrian opposition figures criticize the Obama administration for maintaining a soft position toward the Syrian regime.

McCain’s visit is expected to trigger a wide debate among Syrians.