Zeina Erhayem has wandered around the city of Raqqa and written on the new "civil administration" in it, as the first "liberated city" in Syria 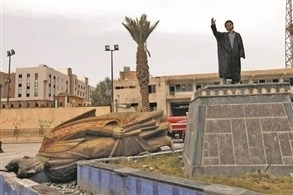 At the main entrance of “Al-Rasheed Park”, in the middle of the city of Raqqa in the northeast of Syria, each one of them stands silently. Frowning eyebrows and blazing eyes outline the faces of the two young men. At the back, there is a hungry man meditatinga loaf of bread, a thirsty one seekingwater and a student looking for a book. As for these two young men, one carries a white banner with the word “civil” written on it, and the other carries another banner with the word “Islamic”.

With this scene, the youth of “Free Students Union Raqqa branch” opened their inaugural silent theatrical show in the first city to be fully controlled by the opposition. “We have dramatized our daily lives in several scenes, and we chose this to be the first scene because it reflects our situation:there are millions of issues that need to be addressed in the city and need more work and effort, and we leave all this and fight over the next form of the State,” says the spokesman of the Free Students Union.

Muhammad estimates the number of the attendants to be about five hundred people, besides the security forces of the revolution that carry sticks to maintain order. “No weapons,” the union requested.

In another scene,an activist becomes responsible as soon as he sits on the chair, according to the “Baathist” definition of the word “responsible”. Another government employee checks the “calendar” in search of the promised day when he receives his absent salary. And this is a significant issue that permeates the concerns and daily conversations of the people of the “liberated city” where life has maintained a certain balance not found in most liberated areas in Syria.

Some governmental institutions in Raqqa still work effectively with fewer staff, as far as their reduced numbers permit. Of these institutions are the post office (communications department), municipality and electricity (emergency department). And some university departments, such as the faculties of Civil Engineering and Humanities, preserve their normal stability, but the administration of the city and its daily affairs will remain two complex cases that need a great daily effort.

The communication directorate seems deserted from outside. But with our approaching steps the guard notices us. He disappears to ask the officer on duty before permitting us to enter. And in a musty room, listening to the voice of a broadcaster from a Syrian oppositionchannel warbling from a small screen, we wait for Abu Ali, who emerges dressed in pajamas.

Abu Ali, like most of the employees we’ve met, is cautious about telling us his full name,but he iscourageous enough to stay here for a week to protect the institution’s documents, devices and equipment. “We were twenty employees.We stayed in the institution till the day when the free army raided the city to protect the binders (the files) and the private properties, before the battalion sent us members to protect our institution,” Abu Ali says, adding, “We are now about two hundred employees; we come every day and work as normal. Despite the fact that 600 employees have left their jobs, 75 percent of the landlines network is still active.”

None of the employees in this institution have gotten their salaries for the past two months,but their sense of belonging to the country has made them continue. “I have been doing this job for 17 years. Can't I bear my institution for two months, though without salary?” Abu Ali asks. He doesn’t know, just like his colleagues, until when the situation will remain this way. But they are now insistent on working with what is available to them, leaving the unknown for tomorrow. “It is sad to be obliged to wait for the regime to give us our salaries and to have no alternative. We don’t expect salaries from the local council or from Ahrar al-Sham (free men of al-Sham),” Abu Ali adds in a low tone. But the movement of Ahrar al-Sham has actually delivered “guerdons” of 10,000 Syrian pounds (about $100) to all the workers in the emergency department in the directorate of electricity.

Fadi al-Sayyah has worked in this department for 14 years. He skipped his work during the “liberation clashes”, but he went back to work because he felt responsible towards the people of his city. “Whenever the electricity was cut either because of the clashes or the bombardment, I felt that I had to do something, and in fact I went back to work with my colleagues and we work hard two shifts a day,” Fadi says and adds, “We have no more than two choices: either to sit at home or to work hoping to get the salary and we chose the latter.”

But Abu Ammar had a third option, which was to stay in the heavy-duty car maintenance workshop he owns in the industrial zone. But he chose to abandon it and volunteer to maintain the municipality's cars. Engaged at work inside a rubbish collecting truck, I find him, hands and clothes rubbed in black. “I volunteered to work in the municipality on the second day of the liberation of al-Raqqa. They don’t have enough of a budget to pay the cost of maintaining their cars, and if they stopped working, rubbish will fill our streets and this is our city and our responsibility,” says Abu Ammar.

But the options which Abu Ammar and Fadi chose were not the choice of the majority of employees in the city. And even those who wanted to work among them were prevented by several obstacles. Abu Ahmad, for example, was an employee in the directorate of agriculture, but he and all his colleagues stopped working a couple of months ago. “Three hundred employees in the directorate became unemployed now, as part of the seat of the directorate was destroyed; then it was taken by the brigade of Ahrar al-Sham and no one is allowed to enter it anymore,” Abu Ahmad says.

Concerning the cessation of work in a governorate mainly dependent on agriculture, Abu Ahmad says: “Crops will be sold this season in free markets, which will do more harm to the national economy and farmers, who will have to sell it at a low price and suffer a loss. Farmers also lost all the aid provided by the directorate.”

Schools are also closed in Raqqaand all the students from all educational levels have left their classes. Abu Omar, who is a teacher of a medium level class, says, “After liberation, the regime bombarded several schools and we don’t feel safe anymore. Furthermore, many brigades occupied schools as seats, and people are afraid to send their children to any school or institute. We are now waiting for God's relief; even high school students don’t know their destiny.”

All these administrative problems have become a load on the shoulders of the civil council in the city. “We have done what we could, such as subsidizing transportation, providing weekly wages for municipality workers, who are now paid 500 S.P ($3.3) perwork day, and reactivating 30% of former workers,” says Abdullah al-Khalil, chairman of the local council. “The aid we receive is little and consequently the guerdons we give to employees are little but in accordance with the capability of the council, and that’s why the majority of employees in the public sector are volunteers now without being asked to,” Khalil explains.

Regardingthe difference in administrative methods between the current council and the directorate which was working under the rule of the regime, Khalil mentions that “the administration has changed a lot, especially in censorship, as civil youth gatherings became the third ring involved in supervising work and helping in the fields they are active in.”

But the efficiency of work and the percentage of employees cannot be compared to how they were in the era of the Syrian regime “as we are in a revolution and we don’t administrate a state, though we try to activate the institutions that can serve under these extraordinary circumstances. We also try to stimulate local investments to supply the council with income,” Khalil says.

A new Islamic administration too

The Islamic movement of Ahrar al-Sham is the strongest armed faction in Al-Raqqa. About one hundred members of the movement have been killed since the beginning of the operation of liberating the city, and the movement now has a notable presence in the city that is reflected in the huge number of road advertisements and in the administrative responsibilities it carries on its shoulder.

“As for the administrative tasks carried out by the Islamic movement of Ahrar al-Sham,” says Abu Hamza, who is the representative of the movement in Al-Raqqa, “there has been an intention from the beginning to provide civilians with the basic services. In the field of electricity for example, we’ve covered a large section of the necessities of the institution to continue its work, and we’ve supplied the national hospital with a medical crew from the movement too. On the level of bakeries, we contracted with other mills in the nearby cities to secure the necessary flour.”

With respect to the salaries, the main concernof the people of Al-Raqqa, Abu Hamza explains that “the sums are given to the employees in all the directorates of the governorate, and it wasn’t limited to the emergency workers. It was a financial grant given by the movement and not considered a salary, and the movement tries to cover the necessities of the emergency workers who still work through its relief office.”

This grant was taken from the cash reserves in the central bank in Al-Raqqa, which the movement has taken charge of. “The movement has no doubt that this cash is Muslims' and it will be spent for their good. One of the first priorities is to fight the Assad regime and push him out of the country, in addition to follow up to provide the necessities of the people,” Abu Hamza says.

The projects of the Islamic movement of Ahrar al-Sham in the future are, according to Abu Hamza: “to reach a consensus that includes the populace and the factions to form a strong police force entrusted with the task of keeping the security of the city and forming a supreme lawful body from which offices emerge to manage administrative and public facilities.”