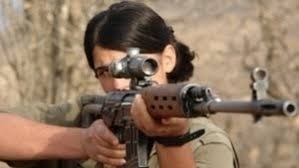 A war correspondent with The Middle East newspaper has made some observations on developments in Aleppo.

The Kurdish female leader Engizik Demhat emerged within a Syrian armed opposition totally dominated by men. She leads a group of Kurdish male fighters in Aleppo, all larger in size and taller than her, issuing them their orders bareheaded.

Demhat leads tens of Kurdish fighters in the Sheikh Maqsoud district of northern Aleppo, which is under opposition control. Aleppo is Syria's economic capital which has witnessed violent and protracted battles with government forces for over nine months.

Despite the differences in political and ideological beliefs, Kurdish groups are distinguished from their Arab equivalents in several things; one is the participation of female fighters. For the  Free Syrian Army fighters, a female leader is highly unusual, as is fighting beside a woman wearing jeans. Demhat’s group consists of more than twenty young women alongside men, none of them older than 25.

"Women can use machine guns and Kalashnikovs and even tanks, just like men," Demhat says.

In a deserted street in Sheikh Maqsoud, winding among buildings destroyed by explosions or riddled with bullets, this ‘Middle East’ correspondent was on route to meet with the Kurdish leader. On the way, a conversation between Demhat and her colleagues on the front was overheard across a radio transmitter.

Demhat calls one of the group leaders.

"Abu Yousef, you will not attack the Sheikh Maqsoud the front of without my permission, do you hear me?" she barks.

And, despite the alliance between Kurdish fighters and the Free Syrian Army, Abu Yousef, a regime army defector originally from Mardel tribe, which initially supported the regime in the past, ignores the call and heads to a deserted street, which is closed with a makeshift barrier formed from cloth to avoid the sniper's binoculars.

The field leader, from the Ahrar Syria brigade, Ziad Gazal tries to calm Demhat down.

"Don’t get angry Engizik, we will handle the situation, Abu Yousef acts of his own," he tries.

Demhat’s answer is furious: "Why did you appoint him a leader for this group?"

These tense exchanges between Arab and Kurdish fighters occur every now and then in the mixed quarter – it was the last to fall to the armed opposition after an alliance was forged between Kurdish fighters and the Free Syrian Army which allowed them to enter the mainly Kurdish district.

The relationship now appears untroubled in general, despite a number of clashes between the two parties weeks ago.

The Kurdish leader describes her group as disciplined and doesn’t hide her contempt for the other groups and their beliefs.

"Some are fighting for God, some for freedom, and then there are groups of thieves," she says.

But her hostility towards the Syrian regime is first and uncompromising.

"We will fight this regime until we topple it," she says.