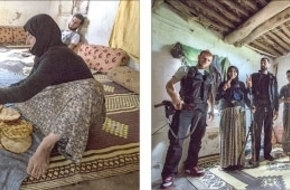 Syria’s so called ‘mother of the revolution,’ has spoken about her role in supporting and sheltering Syrian revolutionaries and dissidents, providing them with food and care.

Surrounded by Kalashnikov-wielding men, Samiha Khalil speaks enthusiastically about the visits she has received by security forces of the Syrian regime.

"They don’t terrify me, “ Khalil says.

“They asked me about my husband's location, but I told them he was dead. They wanted to detain him and kill him because he brought the revolutionists here," she  explains, adding that she believes she is  60 years old, “but I might be older.”

Standing just five feet tall, Khalil has deep set eyes that light up like a 20-year-old girl. Her hands are rough, like those of the men surrounding her.

Her courage has seen her survive in a village now less than half its population, as a result of heavy government bombardment.

Khalil says she knows regime's forces, seeking to kill her, are just three kilometers away.

"The revolution started from this village, in my house", she says.

When soldiers began to defect, seeking shelter at coastal bases 18 months ago, her village was the first safehaven they found along the way.

Among those who sought refuge in Khalil’s house were Riyad al-Asaad and Malek al-Kurdi – the first highly profile defectors and founders of the Free Syrian Army.

The hundreds she has sheltered are taken to the small front room in Khalil’s house and fed bread that she bakes with her own hands.

"I have nine children, four boys and five girls, but I now feel that I have hundreds," she says.

The house now has an opposition battalion named after Khalil; The Battalion of the Mother of the Revolution, consists of 65 men, with more defectors from the coast and al-Zawiah mountain likely to join.

"I give them everything I have when they come", Khalil says. Her sons, the revolutionaries, express their respect, kissing her head and hands each time they salute her.

Yet despite the respect she has earned from opposition's fighters, Khalil has lost friends in the village.

"My friends didn’t believe in what I was doing. They advised me to stay away from the rebels and not to bring them to the village. I didn’t listen. I was happy when the demonstrations started. I also wept for the children killed in Deraa", she says.

Once a noisy village of some 2,000 people, there are now only some 400 people left, with most residents having moved to Turkey, having moved from Samiha's village towards the Kurdish mountain and on to the border.

"They still visit me,” she says. “I pray for those on the front line and wait for them to return," adding however, that the rebel advance has slowed in recent months.

The leader of the battalion says that like others, he has men and weapons but lacks ammunition and heavy weaponry he needs.

“We are trying to head west to reach the place from where the regime is bombarding us,” he says. “We want to fight him them on the ground, but they are always fortified in the mountains."

With no electricity in the village for 18 months, residents are dependent on generators for two hours of electricity daily to recharge transmitters and watch the news.

When the circle of MiGs overhead starts, like every other morning, Khalil says:  "They were close, but thank God they didn’t strike us."

Despite the constant bombing and bombardment Khalil maintains a daily routine; making bread with the flour rebels send her for three hours a day, to feed the men who return to her house from the front line. And every day, Khalil prays and asks Allah for today to be the day the regime falls.

"I hope to hear the news of Bashar Assad's death today,” she says.

“Then I will feel relief.”