Opposition forces confirmed their withdrawal after the regime army, along with Hezbollah committed a massacre in the town 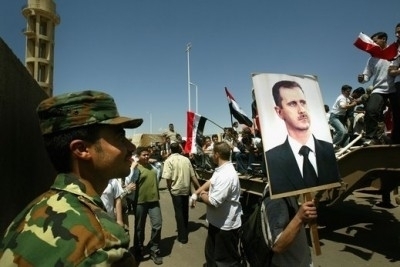 A statement from Syrian opposition fighters in Qusair confirmed that they had withdrawn from the town, on the Lebanese border, overnight Wednesday.

The statement said the withdrawal was agreed after the regime army and Hezbollah militia committed a massacre in the town, resulting in the deaths of hundreds of people.

Syrian regime television said that the army had regained control over the town after more than two weeks of fierce battles, during which the regime, supported by Hezbollah militias, had deployed major reinforcements and bombarded the city with a barrage of missiles and bombs.

"For God your actions have been, Qusair Jihadists. You overwhelmed your successors, for 30 days. The devils Assad and Hezbollah have poured their hell and hatred over you, launching mortars and airstrikes, resulting in hundreds of martyrs and thousands of wounded. It was a suffocating siege that saw a shortage of all living requirements. Civilians believed in your protection until the last minute," the statement said.

"This horrific armory and the flagrant interference by the Lebanese Iranian party was conducted in view of the world… this hypocrite world which couldn’t even open humanitarian paths for civilians. Yes, our only demand was to open safe passages for the wounded and civilians, while everybody's wish was to follow the steps of the ancestor martyrs".

"To complete this epic, some fighters insisted on backing up their brothers, thus tens of them remained in the ruins of the town to ensure the withdrawal of their civilian brothers and confront the attack of these modern Mongols, who had sharpened their knives to slay women and children," the statement said.

It concluded that "those fighters who pledged to die for God, and for the weak, the women and children, are until this moment, still fighting against thousands of Lebanese mercenaries who were years sought refuge in their houses."

"Yes, brothers, this is a round we lost, but the war is changeable and we thank God that our heroes could in the end, secure evacuation of the wounded and civilians. We ask God to give patience to those fighters who pledged death on the soil of blessed Qusair."

The pro-regime TV channel Al-Mayadin showed snapshots for soldiers hanging Syrian flags and pictures of Bashar Assad over the piles of rubbles in the streets of the town.