Ghalioun says balance of power must be changed on the ground while NCC chief says violence must stop altogether. 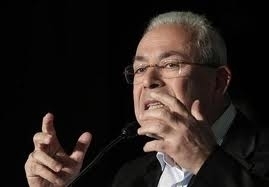 Member of Syrian National Coalition and former president of the Syrian National Council, Burhan Ghalioun said the proposed Geneva 2 conference can only be held if there is a change to the balance of forces on the ground in favor of the revolution during the upcoming month.

"Otherwise, I do not think it is logical [to attend the conference]," he said during an interview with al-Nahar.

Ghalioun said he was optimistic about the prospect of arming the opposition "and the possibility that this may affect a change on the situation on the ground."

Ghalioun said he does not believe the opposition will accept "sitting in any conference with representatives of the regime to reach a compromise," and that "the only negotiable deal is how to transfer power".

Regarding the final communiqué at the recent meeting of G8 world powers, which has called on both the regime and the opposition to fight organizations which are affiliated with Al-Qaeda, Ghalioun said "it doesn’t reflect a change in attitude of the West towards the Syrian revolution," and that "the West’s fear from extremist organizations is not new". He added that this fear "is used as a common pretext by the West and Russia political and diplomatic"

The West, he added, “knows the limited role and danger of these organizations and the knows also the complexity of their formation and the relation between some of them and the regime, who uses them as an excuse."

On the other hand, the head of the Syrian National Coordination Commission (NCC) Hassan Abdul Azim said in an interview with Al-Nahar that "the past months were sufficient for everybody to realize the failure of the regime's security solution, and to understand the danger and uselessness of the opposition's military solution."

"Those solutions have brought extreme terrorist groups to Syria and made the regime bring Hezbollah. This is all on top of the cost of this solution to the state and the people, who have lost thousands of their sons, while hundreds of thousands have been displaced," Abdul Azim said.

"If we could have applied the resolutions of Geneva 1, we would have saved more than fifty thousand martyrs," he added.

Abdul Azim emphasized that "fighting Al-Qaeda and extremist organizations in Syria cannot be done without stopping the violence and the chaos first. Stopping the fighting and starting a political solution that leads to the change of the regime and the rise of a civil state will make these groups isolated because their goals differ from the goals of the true opposition, which asks for a civil democratic state and refuses the Islamic sheikhdoms."

Abdul Azim said that being inside Syria and by dealing with people daily, he believes everybody, including the Free Syrian Army, "have become convinced now of the absurdity and impossibility of the military solution and of the fact that the political solution is the only exit."

"But it has to end tyranny and to change the political system and to transform the country into a civil democratic state," he said.