In an interview with al-Baath, Assad also lashed out at Political Islam and the Muslim Brotherhood 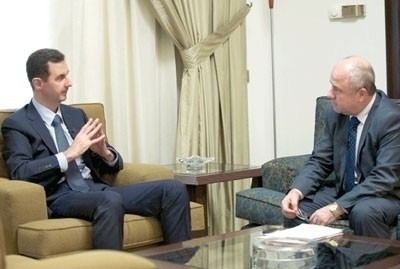 President Bashar Assad has said the war launched against Syria started as a media war to prepare the ground for subsequent attacks against Syria.

In an interview with al-Baath newspaper, the mouthpiece of Baath Arab Socialist Party, Assad said mass media has a fundamental role in defending the Syrian sate and the Baath Party itself

Assad pointed out that al-Baath newspaper, as the voice of the party, has a critical role in defending the Baath Party doctrines and ideology; to convey its experiences and as a channel of communication between the leadership and party members.

Responding to questions, Assad said the Arab identity remains strong as an Arab, national and moderate identity, despite attempts to destroy it.

The President pointed out that the Arab identity should be preserved through political, religious and cultural work.

Assad lashed out at what so called "Political Islam" which, like the Muslim Brotherhood, he said exploits religion for narrow interests. Meanwhile he said he recognizes other parties, based on true religion, which use religion in defense of the legitimate and just causes.