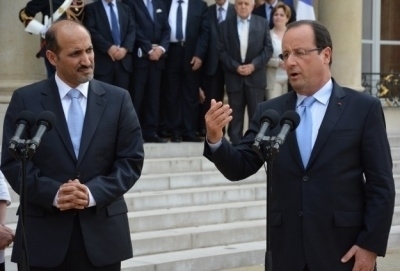 Speaking in a joint press conference following the meeting at Elysee Palace in Paris, Hollande said, "The only representative of the Syrian people for us is the coalition" and stressed that their support for the Syrian opposition would continue.

"The French government is on the side of the Syrian people," he added, and said issues related to the Geneva-2 conference were handled at the meeting.

Reminding that France was the first country to recognize the legitimacy of SNC, Hollande said France would support the decisions that the coalition would make.

Jarba, on the other hand, expressed his gratitude for the humanitarian aids and the political support of France as well as its political position in the EU and the UN.