Children are being recruited as soldiers by armed terrorist groups 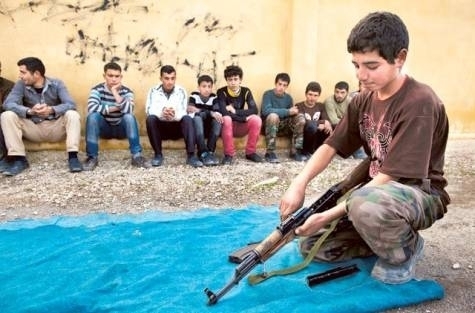 The regionally and Western-backed war against Syria has forced thousands of Syrian families to leave their home, seeking refuge in neighboring countries like Jordan, Lebanon, Iraq and Turkey.

However, the refugee camps set up to host the displaced families in these countries, have offered nothing but humiliation, exploitation and insecurity to these people.

Children, in particular, have been the main victims in unimaginably miserable living conditions in these camps and are exposed to human rights violations. The biting cold, pain and fear these children have been exposed to is enough to make them really miss the stability and the safety of their home had always offered to them.

Recruitment of child soldiers both inside and outside the country by armed terrorist groups to take part in the armed conflict in Syria has emerged as one of the gravest violations of internationally-recognized child rights.

International rights experts have confirmed that children have been exposed to terrible rights violations inside refugee camps in Syria's neighboring countries under the deadly reticence of the international community.

The U.N. has admitted thatarmed groups in Syria are violating international resolutions and conventions prohibiting the recruitment of children in armed conflicts.

An example of the recruitmentof displaced children in neighboring countries was recently embodied in the formation of a children's battalion calling itself "Toyour al-Janna" (Birds of Paradise) to join the so-called 'jihad" along with the armed terrorist groups in Syria.

But while posing a challenge to related U.N. Security Council resolutions, these crimes against Syrian displaced children continue unabated.

Not only militarily exploited, the Syrian children in the refugee camps are being economically and sexually abused and deprived of necessary health and education services, particularly in Turkey, where the government of the Justice and Development Party commits blatant violations against Syrian children and women.

Even the humanitarian assistance sent to them is being stolen by armed groups and gangs.

Children in the refugee camps of Jordan and Lebanon are deprived of education and are being forced to join religious schools to receive extremist brain-washing education based on destructive and dark infidel ideas.

Concerns are also mounting for the fate of displaced children, with the Syrian government facing difficulties conveying humanitarian aid to families because armed groups hijack aid convoys and steal their contents. They have also attacked schools and hospitals to use them as bases for their terrorist acts.

Shamelessly, the armed groups also admit  inhuman acts against women and children in the refugee camps, stressing that they have molested and raped girls as well as boys, encouraged so-called "sex jihad" and run illicit prostitution rings under an alleged "religious" cover.

Media reports from Jordan's Zaatari refugee camp have revealed that Syrian girls, sometimes under 14 years of age, have been raped and exploited for the sex trade.

Some desperate families offer their young daughters for a small sum to men mainly from the Gulf States. The men, sometimes elderly, take their child wives to apartments, staying with them for a few months before going home, leaving behind psychologically destroyed victims who later discover that they were not wives, but were sold for sex only.

Immediate action should be done to stop these atrocities as soon as possible. International organizations must send their representatives to refugee camps to monitorthe security of the children and guarantee they are provided necessary services.

The Syrian government has repeatedly urged displaced Syrians in the refugee camps to return home and promised to provide them with all their needs. It has spared no effort in cooperatingwith U.N. organizations to do whatever it can to halt violations in the camps and guarantee the refugees' safe return.