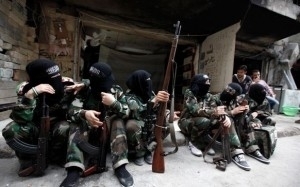 On the front lines in the Salaheddine district of Aleppo, a battalion consisting of 27 women has been formed.

The battalion includes university graduates and operates under the name of "The Battalion of Ummuna (Our Mother) Aisha, one of Prophet Mohamad Wives."

Battalion commander and founder Umm Omar emphasizes that most of the women in the battalion are snipers fighting Assad's forces.

Umm Omar said "their role as women includes fighting contributions in addition to nursing operations on the front line of the Salaheddine neighborhood."

She stressed that the formation of the battalion was in response to the advance of regime forces in the neighborhood of Salaheddine, and after Hezbollah declared its intervention alongside Assad's forces.

She said it prove that the revolution is carried out by men and women in Syria.

Umm Omar said that she and her colleagues "will certainly give up arms after the fall of the regime of Bashar Assad, and the establishment of a civil state with an Islamic reference in Syria."