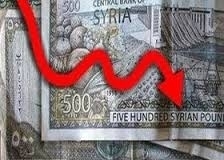 The Syrian regime has been spreading the message that not only did its international position improve politically after the chemical weapons deal, but so did the Syrian economy—and the Syrian Pound is still O.K.

The Central Bank of Syria announced a new intervention session on Tuesday October 22nd to sell $20 million worth of foreign currencies to banks and licensed banking companies.

So it appears that the campaign planned for the run-up to "Geneva 2" is not limited to military progress of the regime’s forces on the ground, or to the regime’s messaging through international media that it is fighting extremism and terrorism, or that what is happening in Syria is anything more than a war on terrorism. Rather, all this is also accompanied by a concentrated bilateral campaign which popularizes the idea that the economic situation is getting better by first supporting staple consumer goods, reconstruction, and by provisioning the market to meet all the needs of Syrians. Second, the campaign also asserts that the exchange rate of the pound—which often serves as an indicator of the economy’s health and a “thermometer” of the psychological state of currency dealers, collectors, and investors—is rising against the main world currencies.

Accordingly, more than one governmental meeting was held focusing on the pound. The decisions of these meetings have been reflected on the ground by the closing of the licensed exchange offices and companies, and by the direct intervention of the Central Bank’s pumping of dollars into the cash market to break the rates of the major currencies, particularly the dollar.

Yesterday, as part of its ongoing process of intervening in the foreign exchange market in order to maintain a stable exchange rate of the Syrian pound, the Central Bank of Syria held a public sale session for foreign exchange including three exchange companies.

In the meeting it was decided that the sale price of Syrian Pounds for citizens would be 168 pounds per U.S. dollar—ten pounds less than the previous auctions—in accordance with the regulations specified in the Central Bank’s statements, with a maximum amount of $500 or the equivalent in foreign currency per month.

The Central Bank explained that the funding applications submitted by banks and exchange companies were very limited—including just Pico, United, Bahem, and Shami—because the available foreign exchange resources in the market were enough to meet the need.

So the regime will continue its direct intervention in the money market to adjust the price of the pound through traditional methods financed by a deficit. We rarely hear that the government is seeking to adjust the exchange rate by improving the performance of its determinants in "production, tourism, export." Rather, the government focuses interventions on manipulating psychological factors—apart from the economic determinants—particularly foreign exchange reserves. But these reserves, which had been estimated to value more than $18 billion, have been wasted by the regime during its war on the people and their revolution.

Here, many questions must be asked. Where did the government get the currencies to sell directly? Was it through public sales held through the exchange companies, or through the niches and windows opened to Syrians? Which companies did the regime delegate to lead the disinformation campaign? And the most important question is how much can the pound withstand these mysterious methods of direct intervention so long as the growth engines and stable inputs are absent from the Syrian economy?

And yet more questions arise. If the government, since its early intervention in the exchange market, has sold dollars against the current price, and not against the targeted political price, and sold them to the exchange companies and citizens directly through banks (as the Commercial and Real Estate Bank did last month) then the government would have gained savings. In that case the price of the pound would also be closer to the real rate than to the political rate—known as the "speculative" market—and at the same time, you would have achieved much greater savings than currently exist.

Several sources estimated that the wise Syrian government spent about $700 million to prop up the pound in 2013 alone, and perhaps more than that the year before. Ok, we won’t ask where that money went as long as the companies, the moneychangers, and the decision makers of the Monetary and Credit Council belong to the regime and its companions. But we do have to ask to what extent can Russia and Iran continue financing the regime to hide its political and economic misdeeds? Will Tehran and Moscow continue supporting Assad, which is exactly what is happening as evidenced by the government’s discussion of its largest general budget in Syrian history: 1.39 trillion pounds, equivalent to U.S. $8.18 billion.