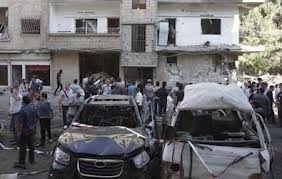 Over the past two years, large numbers of Syrians have sold their private cars, which have become increasingly vulnerable to theft or vandalism.

It is assumed that this increase in supply of used cars would also reflect a decline in car prices. However, prices for now continue to rise, prompting the government to study a bill to allow the import of used cars.

Before the start of the era of "reform and modernization" in the middle of the new millennium, the high price of the private car made it a dream cherished by the Syrian middle class.

This lasted until the issuance of a legislative decree in 2005 that amended the rates of customs duties on private vehicles.

The tax reduction also coincided with the introduction of new automobile companies to Syria, alsong with loans shemes launched by the banking sector in Syria to help finance the acquisition of a new car.

Thus, the number of new vehicles in this period increased quickly. While the number of private  cars prior to the issuance of a decree in 2004 was limited to 272,000, in the year 2010, more than 740,000 were registered in the country, a growth rate exceeding 170%.

With the outbreak of the revolution, private banks stopped car loans. In October 2011, Bashar Assad also issued a new decree to raise the customs duties on private cars at a rate of between 10% and 20% .

"That was the beginning of the process of continuous decline in the movement of sales in the automotive sector," said a sales manager at a car dealership.

While the rate of sales in the first year of the revolution dropped 15%, it accelerated in the second year, which saw in Syrians an "unrivaled desire to get rid of their own cars, for fear of theft or destruction with the escalation of the armed conflict in the country," the dealer said.

But despite the remarkable increase in the number of cars in the market, prices of both new and used cars rose at a rate of between 150% and 250%.

Prices became subject to the fall in the exchange rate of the Syrian Pound. The increase in supply was accompanied by less demand, resulting in the destruction of a large number of vehicles, as well as the destruction and closure of car dealerships, concentrated in the countryside of the capital Damascus and on the outskirts of the city center, such as Harasta, Qaboun, Hajar al-Aswad, which were totally devastated in the conflict.

The Syrian government is currently considering a bill to allow the import of used cars for a period of three to five years. A website close to the regime reported an unnamed source saying that "the decision may be issued very soon, the reason being the high prices of used cars recently".

The source attributed the high prices to the "end of imported new cars on one hand, and the smuggling of used cars to Lebanon and Iraq on the other."

Always, according to the government source, economic evils, along with the rise in prices, come from abroad and their agents in Syria, who smuggle the rest of the cars, before the regime destroys them with its rockets and mortars.

The origin of evil here, according to this logic, is the smuggling operations and not the destruction.