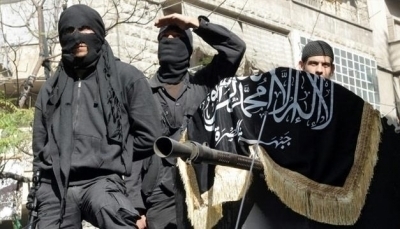 Syria’s Islamic Front, the country’s biggest rebel alliance, issued a statement Monday calling for the protection of all the migrant Jihadists in Syria and their families, in response to the ongoing battle against the Islamic State of Iraq and Greater Syria (ISIS).

“Immigrant Jihadists are our brothers, we share the same blood, the same honor. To whoever violates that, our response will by iron and fire,” the statement said.

“Any foreign jihadist that surrenders will be safe unless he committed a crime, then he will be turned over to the Shariah court,” the statement added.

On Sunday, the front issued a strong warning to Al-Qaeda jihadists (ISIS), three days after a new front made up of local insurgents emerged against them.

“We will fight against whoever attacks us and whoever pushes us to battle, whether they are Syrian or foreign,” the front, a powerful alliance that groups tens of thousands of mostly conservative Islamist fighters seeking to topple President Bashar Assad, said.

Since Friday, along with the Syrian Revolutionaries Front and the nascent Mujahedeen Army, the Islamic Front has been engaged in fierce fighting with ISIS.

While clashes were mainly concentrated in Aleppo and Idleb, fighting shifted to a new province on Sunday, to the town of Tabqa in Raqqa on the northern border with Turkey, where ISIS is extremely powerful, Agence France-Presse reported.

Near Tal Rifaat, a village in the northern province of Aleppo, at least 10 rebels were killed Saturday in an ISIS attack on their vehicles, the Syrian Observatory for Human Rights said.

Also in the Aleppo town of Hreitan, five rebel fighters were killed Saturday in a car bomb attack by ISIS, the Britain-based Observatory said, citing rebel and medical sources on the ground.

Liwa al-Tawhid, a brigade in the massive Islamic Front rebel alliance, said on its Facebook page that its members were targeted in the car bomb attack.

In Idleb in the northwest of Syria, which has also seen major fighting between the rebels and ISIS, four rebels were killed in an ISIS ambush near Jabal al-Zawiya, while five others were executed by ISIS in the town of Harem.

Reuters cited opposition activists saying that the Al-Qaeda-linked jihadists pulled out from strategic areas of northern Syria near the Turkish border on Sunday after coming under heavy fire from other Islamist brigades.

Fighters from the Nusra Front and the Ahrar al-Sham militant group took over ISIS positions in two towns, activists in northern Syria said.

“The Islamic State is pulling out without a fight. Its fighters are taking their weapons and heavy guns. They appear to be heading in the direction of Aleppo,” activist Firas Ahmad said.

Rebel fighters were laying siege Monday to Al-Qaeda-linked jihadists in their northern stronghold of Raqqa, managing to free 50 people they had detained, said the Syrian Observatory for Human Rights.

“The rebels have been laying siege to ISIS’s headquarters in the city of Raqqa since last night. They released 50 Syrian prisoners held by ISIS in another building,” said the Observatory.