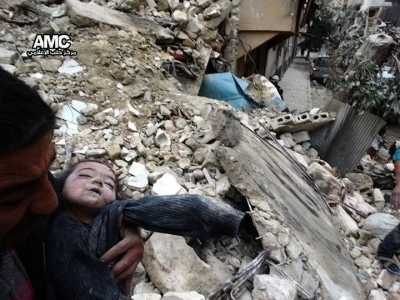 The Syrian Observatory for Human Rights reported multiple barrel bomb attacks across rebel-held parts of the city, where 30 people were killed in similar raids on Monday alone.

The Aleppo Media Centre said one of the raids hit a school in the Masakan Hanano neighbourhood, and that children were among those killed.

There were no immediate details on the number of dead in Tuesday's raids, which came after barrel bomb attacks on Monday killed 14 men, 13 children and three women.

Over the weekend, the Observatory said 85 people were killed in a single day of air strikes and barrel bomb attacks on Saturday.

The fierce air campaign has prompted an exodus of civilians from rebel-held areas in the east and north of Aleppo.

But fighting between rebels and jihadists from the Islamic State of Iraq and Greater Syria (ISIS) throughout Aleppo province has left those fleeing with few escape routes.

Some have fled to Turkey, while others are seeking to enter the government-controlled part of Aleppo, according to Rami Abdel Rahman, the director of the Observatory, a Britain-based group that relies on a network of activists and other witnesses inside Syria.

Some neighbourhoods "have become like ghost towns, with shops closed and residents leaving their homes."

The aerial assault comes as regime forces on the ground try to capture districts in the east and north of the city.

In recent months, the army has recaptured some territory in Aleppo province, including around Aleppo international airport.

Syria's second city and onetime commercial hub has been divided since a major rebel offensive in the summer of 2012, and much of the city's historic Old Town has been demolished in fighting.