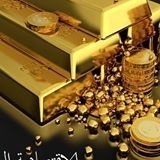 Inflation of the Syrian pound (SYP) reached new levels after the Syrian currency lost most of its supporting factors. Export has stopped, there is no more foreign exchange entering the country, and tourism facilities were destroyed causing paralysis to the sector, which has no more income. Furthermore, agricultural, industrial, and oil production are at their minimum amounts.

The Syrian regime has no more choices but compulsion and obligation. The regime is forcing the people to use the Syrian pound while criminalizing dealing in other currencies. [There is a] continuous psychological push towards providing some fake assurances and promises for savers and depositors—if any can be found—that the crisis has almost passed and there will be investment breakthroughs from allies, maybe Russian oil or Iranian industrial assistance, with the regime hoping to buy some time before falling down.

All of the above has led to the recent release of the golden Syrian pound into the market as a step toward several goals: The first one is about reaching into the gold reserve –25.8 tons, almost 3.5 million golden pounds—as an inevitable step for a government that has wasted most of the Syrian people’s properties and estates, including $18 billion in reserve foreign exchange. The second [goal] is banning dealings in foreign currency, especially after closing many of the exchange companies and arresting their owners for not participating with the [government’s] Council of Money and Credit in conspiring against the people, manipulating exchange prices, and trying to revive the pound’s value. In contrast, the Central Bank [of Syria] has not yet stopped holding public dollar-selling sessions in order to control the Syrian pound’s exchange rate and protect it from breaking down, even if [the government must achieve this] through loss and debt. The third way of seeing the move is as a sign that [the regime is] dying and losing all means of survive, particularly after the opposition entered the Geneva II political talks and the regime’s exposure after its allies support has nearly stopped. Iran, Maliki’s Iraq, and the Russian federation might be thinking, “You can’t escape fate.”

No matter how you look at this step, the conclusion is the same: there is no economy left for the regime to depend on to support its war against the people. That’s why nowadays the regime is using the gold reserves after [having already used up] everything that had been set aside for investment, everything that it could sell, such as oil and phosphate, and after [having] wasted its monetary reserve. This deceptive step aims to create the illusion that the main goal of using the gold reserve is to compete with the British and Ottoman gold (Rashadi) pounds and to be an acceptable substitute for the “enemies’ currencies” of the Dollar, Euro and Turkish pound.

The regime’s supporters are creating publicity and justifications for the new pound. For example, the Chairman of the Association of Jewelry and Goldsmith making— Ghassan Jazmati – expressed his optimism about the golden pound solution and his certainty of the large demand for it in the local market. He went beyond that saying that, “it will compete with the Ottoman gold pound (Rashidi) and the British golden pounds.” Jazmati added that, “according to many inquiries about the Syrian golden pound, we expect a huge demand for it and, [expect] that it will definitely compete with the Rashadi and the English pounds for market share.”

According to the Association, the golden Syrian pound will weigh eight grams of 21 carat gold. It will have the Castle of Damascus and ancient al-Hamidieh souk on one side and the Aleppo Citadel on the other. It will be an exact copy of the Syrian pound in dimensions.

After the high inflation of the Syrian pound, the gold gram made new price records during the last two years. At a certain point it was over 10,000 SYP, but now it is around 5,108 SYP per gram of the 21 carat gold, or nearly 36.2 USD.

If we approached this political matter from a field military angle, we can consider it similar to raining Aleppo with explosive barrels during the first round of the Geneva negotiations and whatever else might result from the coming rounds. It also means that the regime is collpasing and the last moment might be thundering economically, politically, and even militarily. “Did Assad fall down?” is a question with several answers. Politically, ethically, and legally there is an answer and on the table, until now, there is another answer. “Did the economy collapse?” is another question that bears different answers because real life indicates that the economy is truly dying, and this extension of life is dependent upon debt and steps of deception: the release of the golden Syrian pound.

A very important fact that we cannot ignore here is that the regime wanted to make an impression of “holding and resistance” by printing the eagle with its spread wings—the logo of the Syrian Arab Republic—on one face and, on the other, a figure evoking the spirit of collaboration in Syrian society. However, the economic commission finally approved the suggestion of the Ministry of Industry about the shape of the issued pound.