The shocking photograph was circulated globally 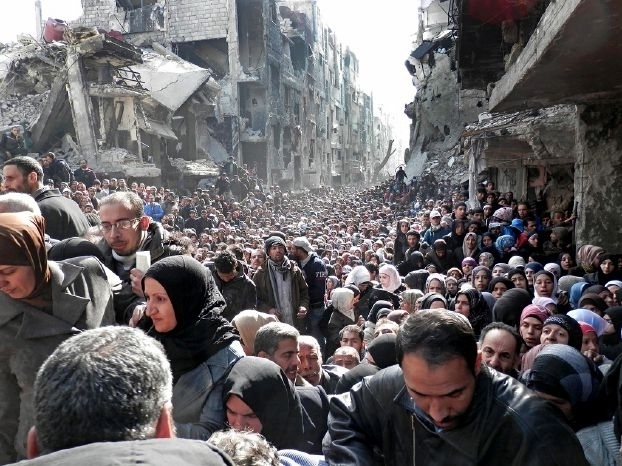 An Agence France Presse photo released by UNRWA of aid being delivered to the besieged Yarmouk Camp on Tuesday has been widely ciculated on social media.

The photo decpicts the dire conditions in the camp which has been besieged for about three years.

The photo shows thousands of people standing in a heavily bombarded street in what seems like a huge silent demonstration, waiting for aid and food.

The Guardian's weekly publication, The Observer published an article titled "Inside the hellhole of Yarmouk, the refugee camp that shames the world". The magazine led the article with a tough statement: "The lexicon of man's inhumanity to man has a new word – Yarmouk".

The article began relaying the story of Khalid, aged 14 months, who was born inside the Camp during the war and siege.

"Trapped with his parents and four siblings, he has seen more suffering in his short life than most of us will experience in a lifetime", the author wrote.

Comments on this photo flowed over social networking sites.

Abdurrahman described the scene in the photo on his Facebook page as "Doomsday in Yarmouk Camp", while Imad Safa wrote: "I tried not to believe it, but it was true; the queue of people waiting aid delivery in Yarmouk". Muhammad Nassar, meanwhile didn’t believe the photo, saying he said he thought it was edited using Photoshop. One British girl tweeted: "Who can say that Britain is not bound to send aid to Syria after a photo like this?"