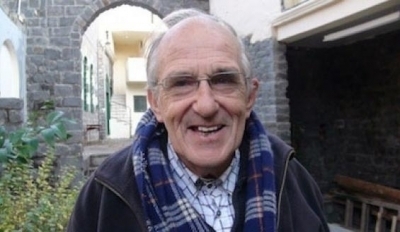 A masked gunman opened fire on a well-known, elderly Dutch priest in the central Syrian city of Homs on Monday, killing him instantly, a fellow priest, an activist group and Syria's state-run media said.

Father Francis Van Der Lugt was gunned down inside a monastery in the city's Bustan al-Diwan neighborhood, a rebel-held area that has been blockaded for over a year by forces loyal to Syrian President Bashar Assad.

The motives for the attack were not known and no one immediately claimed responsibility for the killing.

But the fact that the 72-year-old Van Der Lugt was gunned down in a rebel-held area will likely underscore fears of many in Syria's Christian and Muslim minorities for the fate of their communities should Syrian President Bashar Assad be overthrown by rebels in the country's civil war.

According to both Nayyef and the Observatory, a masked man opened fire on the elderly priest inside his home in the Jesuit monastery in Homs early on Monday morning.

During the three-year civil war, Van Der Lugt repeatedly refused to leave Bustan al-Diwan, despite a series of U.N. evacuations this year that helped hundreds to leave blockaded Homs areas.

A friend of the slain priest, who spoke on condition of anonymity because he feared for his safety, said Van Der Lugt refused to leave until all Christians were evacuated. The priest lived with 24 other Christians in the monastery.

It's not immediately clear how many Christians remain trapped in rebel-held parts of Homs. In February, there were about 200 Christian families, according to Syrian Red Crescent figures at the time.

The elderly priest, who had been living in Syria since 1964, raised widespread attention to the suffering of civilians in blockaded Homs.

"Hunger defeated us! We can see its signs drawn over the faces," Van Der Lugt wrote on Jan. 25 on a Syrian Christian Facebook group page.

"People are wandering the streets screaming; We are starving, we need food! They stop by the inhabited houses trying to find some food. Hunger breaks the rules and eliminates all moral principles," the priest wrote in a statement published in English and French. "We are living a scary reality. Human beings turn into wild animals living in the wild."

The friend said Van Der Lugt also fretted about the future of Christian properties inside rebel-held parts of Homs, which are frequently shelled and battered by Syrian government forces.

Homs' rebels also include hard-line Sunni Muslim groups whose ideologies are intolerant of minorities. But an activist based in a blockaded rebel-area said rebels were shocked by the priest's death.

"The man was living with us, eating with us, sleeping with us. He didn't leave, even when the blockade was eased," said Beibars Tilawi said via Skype.

Tilawi said that regardless of the rebels' views toward Christians, the priest was well-liked for his efforts to get the blockade lifted and alleviate widespread suffering and hunger among civilians.

Albert Abdul-Massih, who worked along Van Der Lugt, said the slain priest held a doctorate in psychiatry and lived an austere life.

"He was a Christian clergyman but he wasn't conservative," Abdul-Massih said. "We learned humanity from him and he used to love Muslims as much as he loves Christians … He was treating people for free and he was a fluent Arabic speaker."

"He called me two days ago and told me that he is hopeful that the siege will end soon," Abdul-Massih added. "His death was a big loss."

The state-run news agency SANA blamed "terrorists" for the priest's death but offered no details. The government uses the term for anti-Assad armed rebels.

Syria's uprising, which began with largely peaceful protests against Assad's rule in March 2011, has evolved into a war with sectarian overtones.

Islamic extremists, including foreign fighters and Syrian rebels who have taken up hard-line al-Qaida-style ideologies, have played an increasingly prominent role among the rebel fighters, causing concern among Syria's many minority communities.

Christians, in particular, cite the abduction of two bishops and a priest, who have been missing since last April, according to Syrian opposition activists and church officials.

Bishop Boulos Yazigi of the Greek Orthodox Church and Bishop John Ibrahim of the Assyrian Orthodox Church were seized last April from their car by gunmen outside the northern city of Aleppo. Their driver was killed. It's not clear who abducted the priests and no group has publicly claimed it is holding them.

An Italian Jesuit priest, Father Paolo Dall'Oglio, went missing in July after traveling to meet Islamic militants in the eastern city of Raqqa. The city fell into rebel hands in March 2013 and was subsequently taken over by radicals including the Islamic State.