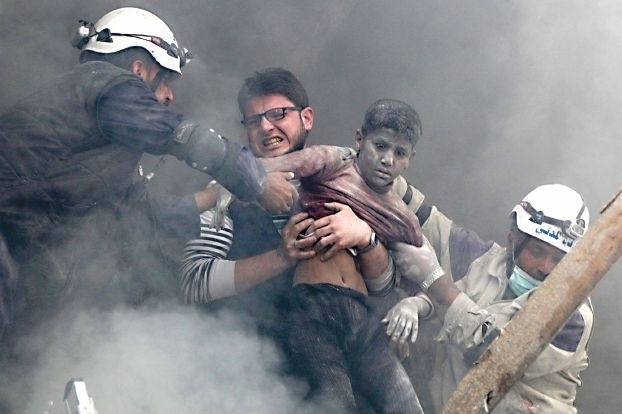 Thirteen opposition fighters were killed in the explosion of a booby-trapped vehicle in the central Syrian city of Homs, as warplanes launched raids on neighborhoods in Aleppo in the north and on opposition-held areas in the northwest of the country.

At least two people were killed when shells fell near the command of regime army in Damascus.

According to the Syrian Observatory for Human Rights, "at least 13 fighters from the Islamic and non-Islamic brigades have been killed yesterday (Sunday), including two battalion commanders, following the explosion of a vehicle in the besieged neighborhood of Homs in Souk al-Jaj (the chicken market) which is under the control of opposition fighters."

The Observatory reported that "the number of martyrs is likely to rise because there are dozens of missing and there are remains of martyrs in the area of the explosion."

The Media Office of Homs said that "twenty of the heroes of Homs were killed and several were injured as a result of the fall of a Grad rocket on a depot ammunition reserve, which has been outfitted for a military operation against the forces of the army and the Shabbiha in order to break the 22-month siege around the city.

The official Syrian news agency, SANA, stated that "a car exploded in Souk al-Jaj in the city of Homs, killing a number of terrorists and wounding others."

The market is located in the opposition-held outskirts of the old neighborhoods of Homs. Regime troops have besieged these neighborhoods for nearly two years , and the people inside them suffer from a fatal lack of medical and food materials.

In the countryside of Damascus, meanwhile, the Observatory said that regime forces bombarded areas in the cities of Douma, Zabadani, Daraya, Ard ad-Dahr and the surroundings of the Fakhoukh checkpoint in the Barada valley. Violent clashes also took place between regime forces and the Islamic fighters in Brigade 137 and its surroundings and the area around Khan al-Shih Camp, accompanied by shelling areas in western Damascus.

In the northwest of the country, helicopters dropped explosive barrels on areas in Rabia, in rural Latakia. Regime forces also shelled the vicinity of Mount Nasr, Nabe al-Mur and the Wadi Huzeiran regions and the towns of Salma, Qoum and Ghamam.  Battles between regime forces and opposition fighters continued since strategic areas in the region fell to the opposition.

In Aleppo, helicopters bombed the neighborhoods of Shaar and Masaken Hanano with explosive barrels, killing a child and a man in Shaar neighborhood. Other deaths were reported elsewhere in the region.

Helicopters dropped explosive barrels on several areas in the towns of Anadan and Haritan, which led to casualties and damaged some houses.

Meanwhile, a girl was killed by a sniper from regime forces in the neighborhood of Sheikh Maksoud, according to the Observatory, which referred to "violent clashes between fighters of Kurdish People's Protection Units and fighters of the Islamic State in Iraq and Greater Syria (ISIS) in the vicinity of the village of Gire Sor in the eastern countryside of the city of Ain Arab (Kobani in Kurdish) following an attack on the village, and there is news of casualties among the fighters of the Islamic State."

Translated and edited by The Syrian Observatory