The aid was offered through the Imperial Orthodox Palestine Society 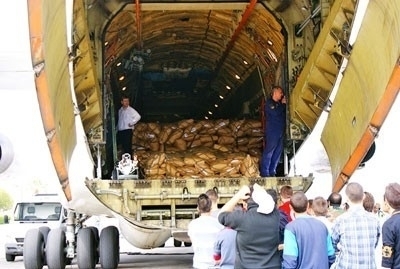 The humanitarian aid was offered by the Russian people to the people of Syria through the Imperial Orthodox Palestine Society, according to a SANA reporter.

Latakia Governor, Ahmad Sheikh Abdul-Qader, hailed the relations binding the two friendly countries and peoples, expressing gratitude on behalf of the Syrian people to the Russian people for their continued support.

The governor stressed that the terrorist attacks in Syria will only increase the Syrian people’s adherence to their principles until security and stability are restored thanks to the sacrifices of the Syrian Arab Army.

The representative of the Russian Emergency Ministry, Alexander Tomashov, stressed that the aid shipment was offered by the Russian people to help the terrorism-affected people, pointing out that more aid planes will soon arrive from the Russian government and the Armenian community to the Syrian people.

Meanwhile, the Grand Mufti of the Republic, Ahmad Badreddine Hassoun said during a meeting with members of the Russia-based Imperial Orthodox Palestine Society that these shipments express the popular stance that stems from the Russian people’s amity to the Syrian people.