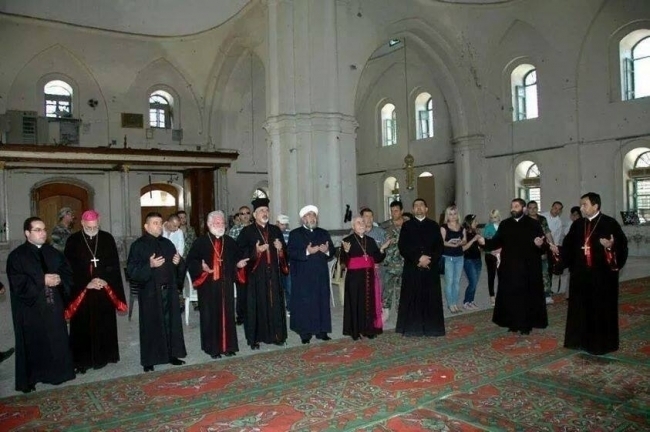 A photo published showing religious figures, both Muslims and Christians loyal to Syrian regime, in Khalid Bin al-Walid Mosque in Homs, has provoked anger among many Syrians, especially after they were shown enteroing the mosque wearing shoes.

The photo also showed a number of women without the hijab, along with Shabbiha forces.

The photo was taken at an intact part of the mosque, just few meters away from the tomb of Khalid Bin al-Walid, the glorified tomb that has turned into ruins by shelling.

An activist from Homs told Zaman al-Wasl that the goal of the visit by Christian religious figures to Khalid Bin al-Walid Mosque, especially at that time, as Homs has been under siege for three years, "is to show National Unity among Syrian people, which contradicts news about turning a Mosque into a Church at al-Hosn Castle, and that the Cross was raised there by Wadi al-Nasayra Shabbiha, besides denying residents access  to the town”.

The activist, who spoke on condition of anonymity for security reasons, continued saying that “many famous figures visited Khalid bin al-Walid Mosque, including Jawaharlal Nehru, Gamal Abdel Nasser and Tito, however, no one of them entered the mosque wearing shoes, as a sign of respect to the Mosque as a house of God and to the figure the Mosque belongs to."

"But now religious figures do not show any respect at all to that, or to people who respect and glorify Khalid Bin al-Walid, because he was the one who liberated Homs and disseminated Islam there. His mosque was the centre for the liberation movement against the French occupation. This mosque is as holy and historically important as Ommayyad Mosque in Damascus or Azhar Mosque in Cairo," the activist said.

Bassam Awil, a media figure, commented on the picture also.

"No doubt that visit of Christian religious figures to the mosque is a promising sign on National Unity, however they spoiled it when they entered the holy place with their shoes. If we supposed that the Sheikh accompanied them and gave them the permission, it is not acceptable for unveiled women to enter the mosque, they should have acted in more modest and respectful way to their people and partners in the country.”

The Khalid Bin al-Walid Mosque, a well known monument in Homs, has witnessed for more than two years many violations by the Syrian regime forces, and the marks of bullets and mortar shells are a proof of the Syrian regime's disrespect for the mosque's historical and architectural value.

The mosque was built in the 13th Century and the recent building was added in the 19th Century,, under the Ottoman era.