Mortar fire, which hit a tent where Assad supporters had gathered in the southern city of Daraa late Thursday, also wounded at least 30 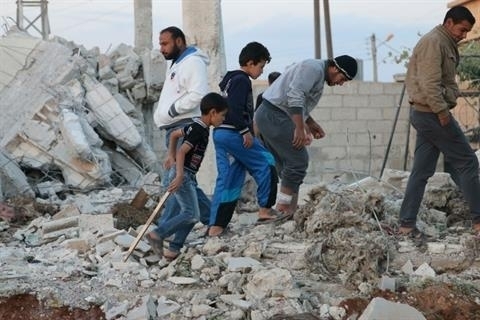 Syrian rebels shelled a rally in support of President Bashar Assad's re-election, killing 21 people, after his troops cut a key rebel supply route to the main northern city of Aleppo.

Mortar fire, which hit a tent where Assad supporters had gathered in the southern city of Daraa late Thursday, also wounded at least 30, the Syrian Observatory for Human Rights said.

Assad faces two little-known challengers in the June 3 vote the opposition and their Western backers have labelled a farce, and is widely expected to clinch a third seven-year term.

The Observatory said a child was among the dead in the attack, the first on Assad's supporters since campaigning started this month.

Pro-government militiamen were also killed in the attack, launched by an Islamist rebel brigade, the Britain-based monitoring group said.

Observatory director Rami Abdel Rahman told AFP the attack "is a clear message from rebels to the regime that there is not one safe area in which to hold the election."

The vote will only take place in regime-controlled areas.

Daraa Governor Mohammad al-Hanus told state television that "the terrorists' crime will not prevent the Syrians from voting," using the regime's term for its opponents.

But an internal opposition leader, Louay Hussein, told AFP the election will only divide the Syrian people "into two different races: one that votes and the other a terrorist race that has not participated".

The vote comes as Assad loyalists, including Lebanon's Hezbollah and pro-regime militia, have taken the upper hand in the fighting.

On Thursday, the army broke a 13-month rebel siege on Aleppo prison, putting regime forces within reach of Castello Road, which rebels in Aleppo have relied on as a supply route to a rear base in the countryside.

A military source told AFP the army has also taken over "several areas around the prison".

Rebels had repeatedly attacked the prison since April 2013, hoping to free some 2,500 detainees reportedly being held in dire conditions.

The UN Office for the High Commissioner for Human Rights on Thursday expressed concern for some 53 political detainees among the prisoners.

"We have also received information that a number of prisoners have completed their sentence. Those prisoners, as well as those arbitrarily detained, should be immediately released," said the UN.

In that vein, UN Secretary-General Ban Ki-moon said humanitarian access throughout Syria was worsening, blaming the government in particular but also rebels.

The conflict flared after a bloody crackdown on a popular uprising in March 2011 and is estimated to have claimed at least 162,000 lives.

"Parties to the conflict, particularly the government of Syria, continue to deny access for humanitarian assistance in a completely arbitrary and unjustifiable manner," it said.

"I remind the Council that intentionally using starvation as a weapon of war is a gross violation of international humanitarian law," the report said.

Ban urged the council to "urgently consider what steps it will now take to secure compliance with its demands," including lifting sieges and opening cross-border points.

The council, which has so far failed to reach an agreement, is to debate the report on May 29.

Thursday's veto at the Security Council was the fourth time Russia and China have blocked Western resolutions on the conflict.

The other 13 council members all voted for the draft, which would have seen crimes committed by all sides in the country's war examined.

Meanwhile, the world's chemical watchdog said the last of Syria's chemicals agents were packed and ready to be taken to Latakia and out of the country when the security situation permits.

Syria has already shipped out 92 percent of its stockpile from the Mediterranean port of Latakia.