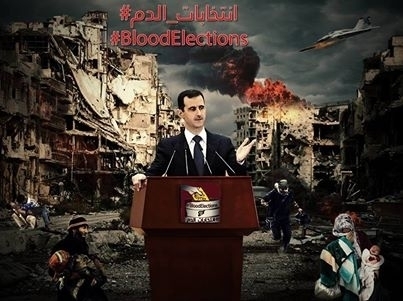 Syrian activists have began to publish videos and media campaigns condemning what they describe as the "farcical" presidential election announced by the Assad regime.

Web pages were filled with images and statements mocking the bloody regime and the "electoral farce". The products gave an impression of a return of the civil movement and the participation of large segments of Syrian society – including the silent majority – and their refusal of the play of elections. Many in the campaign share the same objectives, which are concentrated on:

1. Highlighting Syrian's continuous rejection of the Assad's regime to the world

2. Recovering the original image of Syrians as funny and smart young people

3. Highlight and focus cynically on the idea that the Assad regime is the basic source of the problem

The products produced and used by the Syrians vary, starting with montaged clips of old ads and cartoon films of the current situation, to radio advertisements and events.

All efforts met one objective: To stop regime's attempts to legitimize itself  by exposing and highlighting the massacres the regime committed in a sarcastic way.