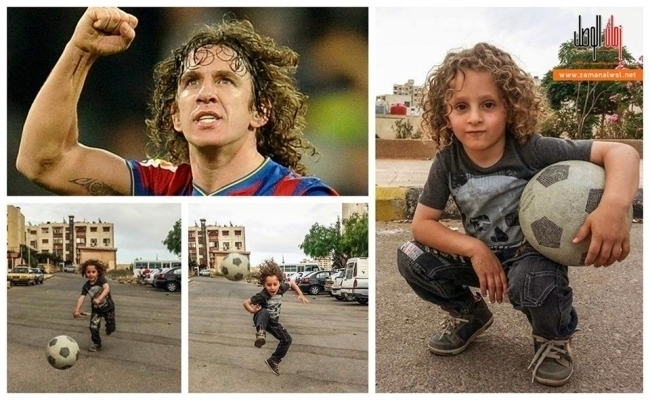 In Qaboun neighborhood, in the heart of Damascus countryside, with the World Cup 2014 underway, a child, less than four years old, with long blonde hair, performs graceful soccer moves that are skilled beyond his years.

Pictures of the child were published on the Facebook page, Lens Young Dimashq. Under the photographs, comments explain that "Zain (Abu Taim), nicknamed the Qabouni Carles Puyol is doing exercises in preparation for the World Cup."

Puyol, whose name Zain has adopted, is a retired Spanish footballer, who served as the longtime team captain for his club Barcelona, and won a total of 21 titles including the Spanish League, Spanish Cup and Europe's Champions League, all the way to the Spanish, European, and World Super Cup.

Zain has many similarities with Puyol in terms of physical appearance – the long blonde hair and facial features – in addition to his passion and obvious talent for the sport.

Zaman al-Wasl reached the administrators of the Facebook page to obtain more information about the child, whose sporting maneuvers suggest a great athletic future ahead. The administrator said that Zain is like any other child playing in the streets in Damascus.

The administrator added that the child’s family prefer not to reveal the name of the area where their child plays, for safety reasons, noting that Zain hasn’t enrolled in any team or sport club because of his young age, but only plays in the street.

Asked about Zain’s feelings about being photographed, the administrator said that the child is very talented and plays well above his age and stage.  While being filmed, Zain plays and practices with his friend but sometimes gets frustrated with the camera, just wanting to complete his game.

Zain is a Real Madrid fan and tries to imitate the movements of its players. According to the administrator, the child likes to play everywhere, particularly at home, where he makes a mess of the house.

The three-year war in Syria has deprived Syrian children of their favorite toys and games, which they used to practice in clubs, streets, schools and parks. In this context, Facebook activists have created a hashtag called #SyriainBrazil accompanied with a picture of a child expressing her passion for football, saying: "I am Syrian and I love football but this year I cannot watch the World Cup because I had to flee the regime's crimes and live in a tents without any of life’s necessities."

Under another child’s picture, behind a fence in a camp, a comment reads: My father loves football and he used to play with me, and bring balls to our house. I used to watch matches between his favorite team Argentina, but this year I’m lonely because my father has been detained for more than a year in the regime prisons.