Although attention was first focused on the role of a plan for a Qatari pipeline to Europe through Syria in Doha’s efforts to topple the regime there, other parties tried to take advantage of the war in Syria to present themselves as a future alternative 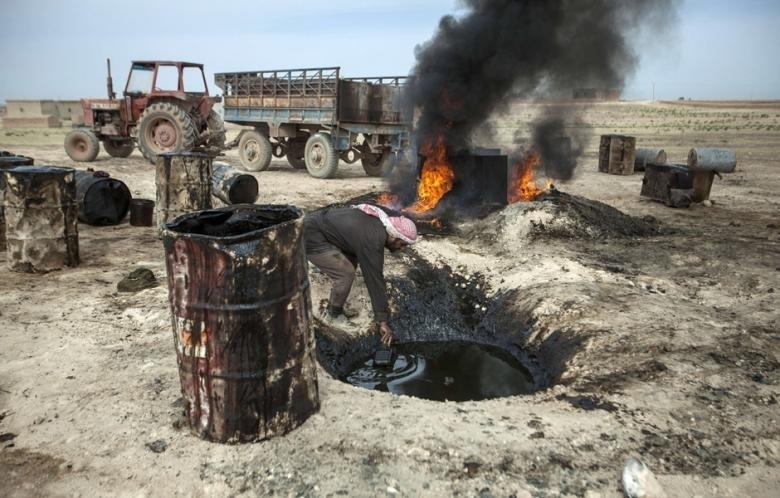 With the Islamic State in Iraq and Syria (ISIS) and al-Nusra Front in control of several oil fields in Syria, the two radical Islamist groups entered the “oil exporters’ club,” with Western enablement. This, in addition to the closely anticipated hydrocarbon discoveries in Syria’s territorial waters and other pertinent developments, has made the oil issue a strong factor in the Syrian crisis, albeit one that has so far remained behind the scenes.

Professor Adnan Mustafa, a Syrian physicist, banks on his years of experience as minister of oil and mineral resources in the 1970s, and his tenure as assistant secretary-general of the Organization of Arab Petroleum Exporting Countries OAPEC, to settle a crucial question related to the role of energy in the regional and international conflict currently raging over Syria. Mustafa, speaking to Al-Akhbar, stressed that Syria’s limited oil and gas output did not ultimately affect the perspective of what he calls the petroleum empire of darkness, which he said eventually decided that Syria was “a major obstacle to its plan for a new world order, and therefore, had to be removed from the new Middle East.”

In effect, oil and gas figure on at least three levels in the crisis in Syria: First, the country is a strategic conduit for oil and gas pipelines that could link production areas in the Gulf and Iraq to Mediterranean nations and Europe. Second, major oil and gas discoveries are anticipated in the eastern Mediterranean. And third, there is ISIS and al-Nusra Front’s seizure of oil wells in eastern Syria, producing and selling oil to Turkish dealers, and the myriad consequences this new reality has had.

Although these three issues have been widely discussed recently, there have been important developments that did not receive much attention despite their seriousness. Indeed, the increased focus on the huge revenues flowing into the coffers of the armed groups and clans in the eastern region – the result of extracting, selling, and even refining 50-60,000 barrels per day – ignores another growing risk that threatens the future of production in those fields, and that raises the possibility of Syria losing fully or in part these reserves, namely, the depletion of or permanent damage to these fields. Note that prior to the crisis, these fields had produced up to 350,000 barrels per day.

Mustafa does not discount this scenario. Despite his conviction that production in these fields had already been in the final part of the production curve, he says there is still oil to be recovered and sold to bring in huge revenues for the armed groups and clans controlling them.

Another oil expert explained this further, saying that prior to the conflict, the fields in question had entered the stage of enhanced recovery, which for example requires injecting high-pressure fluids to extract hard-to-reach oil from the rock layers beneath. The armed groups have destroyed many installations and equipment belonging to the oil fields, and with the absence of trained technicians, production from those fields is currently proceeding without any proper control and oversight. This increases the odds of those fields becoming depleted, or at best, Syria would have to pay exorbitant costs to recover the remaining oil there in the future.

The reports being circulated about the presence of large oil and gas reserves in Syrian territorial waters may have assuaged some concerns regarding the possibility of losing the oil fields in the eastern region, and may bring reassurances that Syria could remain an oil producer. However, according to Mustafa, this must not be overstated. He said that during the years he served as minister of oil in 1975, the ministry was able to verify the presence of oil and gas reserves in Syrian waters in sufficient quantities to offset the losses in the eastern region. Yet, he believes these reserves are smaller than the exaggerated figures currently being hyped suggest.

Whatever Syrian oil and gas production may look like after the crisis, Syria’s position on the regional and international energy map has been reinforced with recent political and economic developments. Ziad Ayoub Arbash, an energy expert, identifies four shifts in what he calls the centers of gravity influencing the region and Syria as follows:

– The emergence of new economic powerhouses that have been strengthening their position through high, sustained growth.

– The shifting of the center of gravity of the world from the west and north to the south and east.

– The European Union (EU) pivot to the east.

– The Turkish pivot to the countries of the Caucasus and the Arab nations.

Syria is in a good position to benefit from these transformations, as its geographical location combines two advantages desired by oil producers and consumers: Its position as the gateway to Turkey and the EU nations on one side and to Lebanon and the Mediterranean on the other side; and its position as a conduit for Iraq, Iran, Jordan, and Gulf nations to the Mediterranean and the EU.

Although attention was first focused on the role of a plan for a Qatari pipeline to Europe through Syria in Doha’s efforts to topple the regime there, other parties tried to take advantage of the war in Syria to present themselves as a future alternative.

One example involves a project reported by the media for a railway line between Jordan and Israel, which would meet some import and export needs of Iraq and Gulf nations. In the views of some experts, there are some parties in favor of using such projects for gas transportation and export, including Qatar, which had previously expressed its willingness to export gas to Israel. Such a project would help Qatar circumvent Iranian ambitions to export gas from the South Pars field, which Iran shares with Qatar, through Syrian and Lebanese ports.

According to Al-Akhbar’s sources, the Syrian government, as soon as it heard those reports, dispatched an official delegation to Iraq to verify whether they were credible or not, and also to discuss ways for cooperation between the two countries in the transportation sector. Baghdad ended up denying the claims, and the relevant authorities in the two countries were asked to conduct a feasibility study for joint railways for goods, transit, and passengers. This project could be developed in the future to include building a new pipeline to carry Iraqi oil to Syrian terminals for export.

It is unlikely in the future, in light of the Qatari and Turkish attitudes on Syria and their alleged support for armed groups, that Damascus would allow the construction of any oil and gas pipelines on its territory to carry Gulf output into Syrian and Lebanese seaports or by land into Turkey and then Europe. By contrast, a resolution to the crisis in Syria would revive a 2011 agreement signed by Damascus, Baghdad, and Tehran to build a $10 billion pipeline linking the Iranian port of Asalouyeh to the Syrian port of Tartous through Iraqi territory. Damascus and Baghdad could also revive an old agreement to build a pipeline for Iraqi oil through Syrian ports to replace the old pipeline, especially since Iraq’s relations with Gulf countries and Turkey are currently tense.

This could induce the Iraqi government to seek a safe port for the export of its oil, and not to expand economic relations with countries accused of interfering in the internal affairs of Iraq.