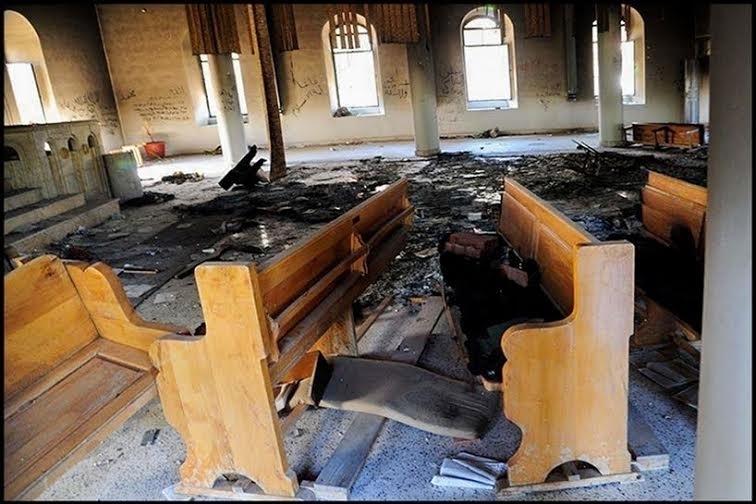 More than one month after the withdrawal of the opposition forces from the Syrian city of Kassab, media activist Noor al-Hallaq has told All4Syria exclusive information regarding reports of looting and damage to churches in the city.

State media loyal to the regime and its western supporters reported that Islamist opposition forces breached the sanctity of Christian places of worship, stealing and looting their properties, simply because they were Christian.

On 24 March, 2014, Islamist factions and brigades of the Free Syrian Army took control of the coastal city of Kassab, 65 km north of the city of Latakia, which has a majority Christian Armenian population, as well as some of the villages and surrounding hills, after violent clashes with government forces.

Kassab is considered important strategically because it is located near the only border crossing with Turkey in the province of Latakia. Opposition fighters had taken control of the city at the end of March, forcing most of the majority Armenian population to flee their homes because of the fighting.  With the beginning of the battle, residents from all sects abandoned the city, leaving behind some elderly people, and those were handed over to Turkey for safety.

Opposition forces were able to control the city after twenty days of fighting, and they remained in control of it for about three months, before withdrawing completely.

Hallaq, a media activist and former political prisoner, reporting news from Kassab, said in an interview with All4syria that "because the majority of the population were supporters of the regime, the Shariah Commission decided to empty their homes and sell the properties as spoils".

Numerous factions participated in the Battle of Anfal, according to an official description by the rebels, which referred to the Anfal battle mentioned in Holy Quran. The description has a symbolic and historical reference to the "spoils" divided between Muslims after the battle of Badr. The most prominent among the factions that participated in the battle were Ansar ash-Sham, Ahrar ash-Sham Movement, the Nusra Front, Sham al-Islamiyah, in addition to other battalions from the Free Syrian Army, Hallaq said.

Hallaq said he approached the Shariah Commission about the decision to offload the houses.

"I asked the commission about the subject and one of the judges answered that they are almost 100 percent certain that the houses and restaurants belonged to the senior Shabbiha in the city," Hallaq said.

He said he doubted this when he personally asked the Commission to take some of the furniture to the Information Office which he manages.

"We asked to take our requirements from a government department, but their response was that if you want to do good, help your brothers in moving the spoils to Aliamdiah, a border town with Turkey, to be sold in Turkey, so that the returnscould be divided among the fighters," he claimed.

According to press reports, the churches of the city were destroyed and looted. Activists broadcast on YouTube a video clip from within the Anglican Church, showing a banner for the Nusra Front at the altar, reading "No God but Allah". On the walls were written the names of factions that had entered the church, and no wal was left unmarked with sentences such as "No to the crusaders", "We will face you again, worshippers of the cross", "Virgin Mary is our mother, not yours, cross worshipers", and "We are the people who Allah blessed by Islam".