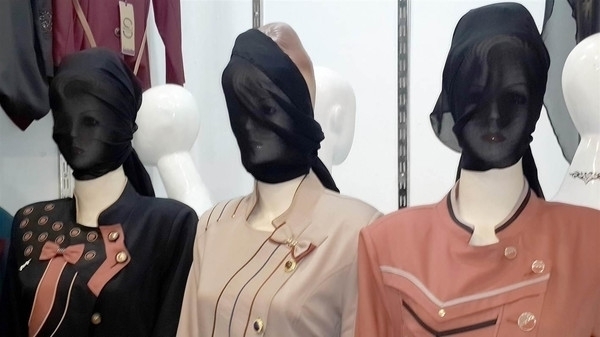 The  Islamic State (IS) has forced shopkeepers in the Iraqi city of Mosul to veil the faces of mannequins in store windows, as part of the "application of Islamic law" in the areas under its control.

NBC News published an image of one of the shops in Mosul in which the faces of mannequins were covered with a black veil. Several global news sites said that the decision did not discriminate between female and male mannequins, because anything depicting the human body is completely forbidden, and that mannequins are similar to idols.

The new IS actions come in the context of a series of bizarre laws imposed on residents in areas under its control under the excuse of the application of Islamic law. These practices are sometimes brutal and sometimes comical and hard to believe.  Women's battalions, for example are looking for wives for the men of IS, and in Raqqa, IS formed the "Khansa" battalion after it took control of the city, led by the Tunisian woman Umm Rayan, which tours the city and checks veiled women's identities. It also monitors the Islamic dress code imposed by IS on women, and arrests anyone who does not wear a veil, or wears any form of adornment underneath it.

Activist and director of the Raqqa Youth Coordination Committee, Muaz Huwaydi, described the strange practices of the battalion.

"Some members of this battalion are carrying sticks as they walk around in the streets. Their one task is to beat the women on her leg if part of the trousers she wears under the veil appear while stepping up on the sidewalk or stairs," Huwaydi said.

"Some members of this battalion work as wife-seekers, telling the fighters of IS about the families in which there are marriage-age girls. If an IS wan wantd to marry one of these girls, the father often fears the consequences of rejection, which led to forced marriages ending in some cases with the suicide of the girl or with them being left alone after the fighter abandons her after just several nights," Huwaydi explained.

Cutting hair is forbidden. Activists in Aleppo, who asked to remain anonymous, reported that IS has closed mens barber shops in the city, on the grounds that they violate Shariah and that cutting hair makes them "similar to the infidels".

IS also prohibits cigarettes and hookah in all the areas under its control, burning them in public squares and whipping smokers and cigarette traffickers.

IS amputated the hands of thieves and crucifyied those they call apostates. Two women, accused of being the wives of infidels in Raqqa were stoned to death last week in Raqqa.

IS also prevented gynecologists from practicing their work, and called on women in various cities to go to private clinics supervised by female doctors. Women's tailors were closed if they are not run by females, and the shop assistant must also be female in female clothing stores.

In the rural areas, there have been several reports that IS fighters forced farmers to cover the teats of cows, on the grounds that they are "seditious", however these incidents have been isolated and not imposed in large areas or entire villages.