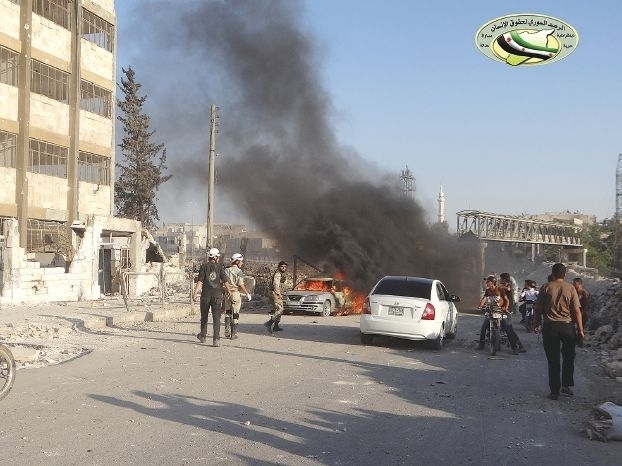 The war has reached Jabal al-Arab in Syria and the united Druze minority is no longer considered outside the battle, after they were attacked in Dama and Shania villages by the bedouins and the Nusra Front.

The attack resulted in the death of 15 Druze citizens, including 12 sheikhs and three young men from the Tawhid al-Arabi party, headed by Wiam Wahhab.

Fighters with the Nusra Front launched the violent attack on Dama from al-Lajat village, which is close to the countryside of Sweida.

The Syrian Media Commission explained that "the clashes took place between the armed bedouin fighters and the pro-regime People's Protection Committees in Dama, in the western countryside of Sweida. Two of the victims were Druze sheikhs killed, who were killed during the battle, while the third victim was a fighter from the Committees. Two other sheikhs and three other fighters were injured, some of them critically.

Hundreds of sheikhs and civilians gathered in front of the governorate building in the middle of the city, chanting slogans against the regime.

The Syrian official news agency SANA reported from the Sheikhs of Aql (the sheikhs of wisdom) of the Druze sect in Syria their call "to avoid the intrigue because it will lead to nothing but destruction and death".

In order to avoid escalation, 55 activists, institutions and media commissions in the governorates of Daraa and Sweida issued a joint statement in which they stressed the unity and neighborhood relations between the two governorates to face the incitement sought by Assad's regime who tries to revive the old arguments between the two parties in order to spark a civil war that will destroy both sides.

The Syrian Observatory for Human Rights said yesterday that regime's air forces stroke the outskirts of al-Qaria town in Sweida twice, while "eight persons from Dama were killed and twenty others injured in clashes between armed groups from the village and Islamist and Bedouin fighters".

The statement issued by activists from Daraa and Sweida emphasized that Assad's regime is trying to reactivate "the old arguments" between the people of the two governorates in order to start a war in the region, especially that the armed factions on both sides are bringing up more reinforcements."

"Assad's troops didn’t participate in the battles on the ground, and the only action taken by regime army was shelling the town of al-Lajat, an operation aims to put both sides on the edge of direct confrontation," the statement said.

"The regime's stronghold is there in Damascus, not in Sweida, and those who want Sweida and Daraa to fight each other actually want Assad's regime to stay in power."

"Throughout history, there were many attempts to create intrigues between Sweida and Daraa, all have failed, and today the patriotic young men from both governorates will never let the intrigue the regime has been seeking for three years become a reality," it said.

Meanwhile, member in the Syrian National Coalition, Jaber Zaiin, called on the people of Dama and its neighborhood to "control themselves and avoid the intrigue and cling to the national unity in order not to give the regime a chance to complete his plot against the people of Daraa and Sweida, a plot dedicated to settle his tyrannical rule based on dividing the nation".

Al-Zaiin asked both parties in a statement published on Coalition's website "to use their minds and cling to national unity. Assad's regime creates hatred between Syrian people to cover the real voice which wants to topple him down. It is sorrowful that Syria witnesses these conflicts in a time we are supposed to unite our efforts to get rid of the base of all the evils suffered by Syrian people, that is the dictatorial and tyrannical regime of Assad".