Diana Foley posted the statement after the Islamic State in Iraq and Syria (ISIS) released a video on Tuesday purportedly showing the beheading of Foley and threatening to carry out further executions until the United States ended its air strikes against the militant group. 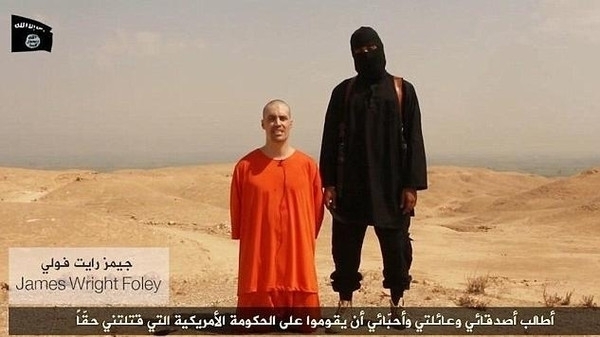 Mother of allegedly slain photojournalist James Foley released a statement Wednesday appealing to her son’s “kidnappers to spare the lives of the remaining hostages.”

Diana Foley posted the statement after the Islamic State in Iraq and Syria (ISIS) released a video on Tuesday purportedly showing the beheading of Foley and threatening to carry out further executions until the United States ended its air strikes against the militant group.

“We have never been prouder of our son Jim. He gave his life trying to expose the world to the suffering of the Syrian people,” Diane Foley wrote.

In the video, which was not immediately possible to verify, a masked man performed the beheading with a short blade after warning President Barack Obama in spoken English against any further air strikes on ISIS' positions.

“Like Jim, they [the remaining hostages] are innocents. They have no control over American government policy in Iraq, Syria or anywhere in the world,” the statement read.

Foley also said that she has “never been prouder of our son Jim” who gave “his life trying to expose the world to the suffering of the Syrian people.”

The White House said they could not verify the authenticity of the video and are were attempting to confirm if Foley had been killed, the Associated Press reported.

"If genuine, we are appalled by the brutal murder of an innocent American journalist and we express our deepest condolences to his family and friends," White House National Security Council spokeswoman Caitlin said in a statement Tuesday.

The ISIS video titled “A Message To America” begins with footage earlier this month of Obama announcing his decision to authorize military airstrikes in Iraq against ISIS targets.

“I call on my friends, family and loved ones to rise up against the real criminals, the U.S. government, for what will happen to me is only the result of their complacency and criminality,” the man, who the masked man later identifies as Foley, said.

“My message to my beloved parents: save me some dignity and don’t accept any meager compensation for my death from the same people who effectively hit the last nail in my coffin with their recent areal campaign in Iraq,” the man, who is dressed in orange clothes, said.

“I call on my brother John, who is a member of the U.S. air force, think about what you are doing, think about the lives that you destroy including those of your own family. I call on you John: Think about who made the decision to bomb Iraq, to kill those people, whoever they may have been. Think John: who did they really kill? Did they think about me, you or our family when they made that decision?” he said.

“I died that day John: when your colleagues dropped that bomb on those people, they signed my death certificate. I wish I had more time. I wish I could have the hope of freedom to see my family again but that ship sailed.

“I guess all in all: I wish I was not an American,” he concludes, before the masked man, pointing a dagger at the reporter’s head, identifies his captive as Foley.

“This is James Wright Foley, an American citizen of your country. As a government you have been at the forefront of the aggression toward the Islamic State [ISIS]. You have plotted against us and gone far out of your way to find reasons to interfere in our affairs,” the masked man said.

“Today, your military air force is attacking us daily in Iraq, your strikes have caused casualties amongst the Muslims,” the man, speaking in what sounded like a British accent, said.

“You [the United States] are no longer fighting an insurgency, we are an Islamic army and a state that has been accepted by a large number of Muslims worldwide.

The man warns Obama that any attempt to “deny the Muslims their rights of living in safety under the Islamic Caliphate will result in bloodshed of your people,” before conducting the execution.

"Find James Foley," the campaign run by his family to secure the 40-year-old freelancer's release, posted a public message online following the release of the video asking for time "to seek answers."

The man then holds by the shirt a second individual who is identified as Sotloff and warns Obama to cease targeting the militant group.

“The life of this American citizen Obama depends on your next decision,” he warned.

Following the release of the shocking video, British Prime Minister David Cameron broke off his holiday for meetings Wednesday on the threat posed by ISIS.

Cameron was returning to his Downing Street office in London to discuss the situation in Iraq and Syria as work was under way to identify the executioner in the beheading video, who spoke with a British accent.