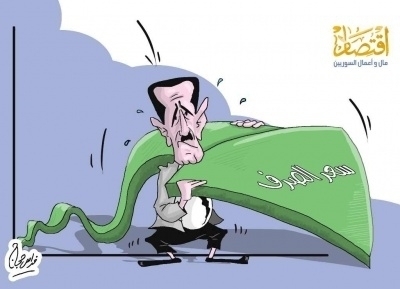 The U.S. Dollar exchange rate in Syria has increased recently, raising questions about whether the nature of the increase is a normal and temporary change or a permanent result of a real crisis in the Syrian economy.


The dollar exchange rate reached 200 Syrian Pounds this week after a continuous rise that is expected to continue in the future.

Husein al-Ammash, a Syrian economist said he supports the idea of permanent elevation of the dollar exchange rate, expecting the dollar price to hit 300 SP.

“If the Central Bank carried on this trend, it would lose all standby reserves in foreign currency, which would not suit the close circle of the regime,” he said.

“If that happened, it would be an indicator of the terminal collapse of the Syria Pound. The exchange rate could reach 300 SP to the dollar, combined with a collapse of economic activities.”

The expert said the inability of the Syrian regime to keep power and control in the country has had a big effect on people, especially pro-regime supporters' sense of security and confidence in the regime’s ability to survive. This has encouraged them to get rid of the Syrian Pounds they have and save their dollars and other foreign currencies, which would lead to an increase in the exchange rate value of the dollar.

“Economy and currency are based on security and stability, which are lost in Syria. The black market prices are good indicators of a real crisis of the economy, which is more acute than the official rate would tell,” the economist added.

Ammash noted rumors about a decrease in the financial support provided by Iraq and Iran for political reasons, one of them being a new Iraqi prime minister, while the other change is Iran’s confidence in the Syrian regime’s ability to survive, besides the increase in international restrictions on trade and money transfers.

The economist regretted the status of the Syrian Central Bank, especially given what is known about its inability to support Syria’s economy in peace time.