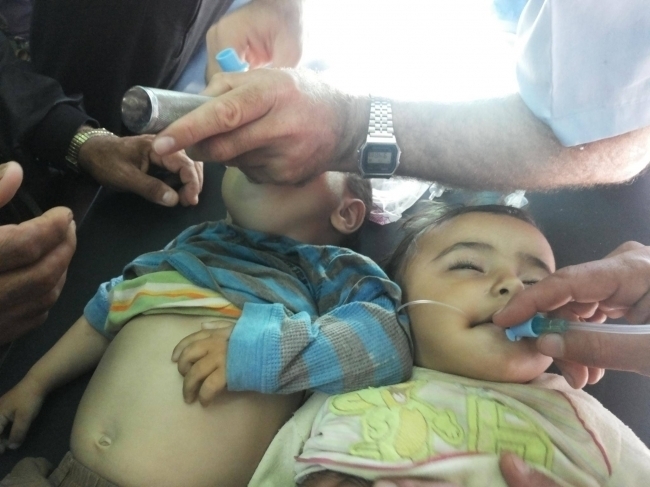 The Health Ministry in Syria has raised preparedness levels to confront the problem of malnutrition, particularly among children under five.

The problem has escalated concerns for children already in danger in the war-ravaged country.

The crisis in the country, prompted by an internationally-orchestrated terrorist war waged against Syria, has now been ongoing for almost four years, during which hundreds of thousands of mercenary terrorists have flooded the country from all corners of the world to commit atrocities in their implementation of foreign agendas.

The crisis has taken a huge toll on all aspects of life in Syria, with children being among the hardest hit. Tens of thousands have been forced to flee their homes with their families and miss out on education after being forced to leave school. On top of this, children are being kidnapped, tortured and recruited by terrorist groups to bear arms and join the fighting.

The health circumstances for children are no less serious than these setbacks facing children. The situation has unfortunately deteriorated, especially in insecure areas where access to food, nutrients and medical supplies are prevented by terrorist activities.

In response to this emerging situation, the Health Ministry has embarked on various programs to mitigate the risk of child malnutrition.

The Director of Health in Homs province, Abdul-Muamen Qashlaq, said the nutrition department at the directorate has activated a program of nutrition surveillance at health centers as well as in the makeshift shelters hosting displaced families who fled terrible and inhumane acts committed by terrorist organizations in their local areas.

Peanut butter, a nutritional supplement known for boosting nutrition, is being regularly distributed to health centers and makeshift shelters. Qashlaq said the measure is part of a nutritional surveillance plan set up by the Health Ministry and the World Health Organization (WHO).

Children who are diagnosed with malnutrition are also placed on special therapeutic nutrition diets, according to Ismael Hussein, Head of Health Education Department in Homs.