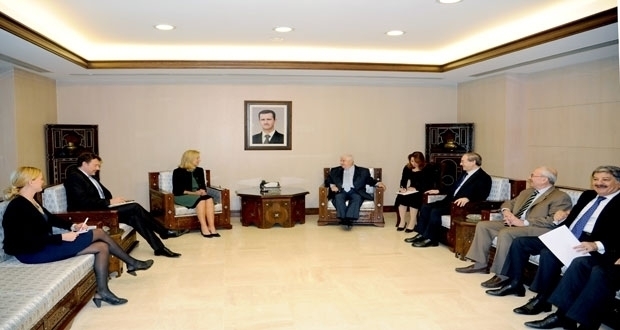 Foreign and Expatriates Minister Walid al-Moallem on Wednesday received the Special Consultant for the U.N. Secretary-General, Sigrid Kaag, and the accompanying delegation in Syria.

Talks during the meeting focused on Syria’s implementation of its obligations as per the Chemical Weapons Convention, with emphasis on continuing constructive cooperation between Syria and the Organization for the Prohibition of Chemical Weapons (OPCW) in order to close the file and dismantle Syrian chemical weapons.

Moallem said that Syria is keen on being treated as a member state in the Chemical Weapons Convention without any discrimination or politicization, asserting that the unprecedented success in dealing with the chemical weapons issue was possible thanks to the diligent cooperation with the joint mission led by Kaag and her team.

Kaag voiced satisfaction over the achievements made so far, saying that the dismantling of Syria’s chemical weapons set a positive precedent in the history of the U.N.