Merchants are being extorted by the National Defense Force militias 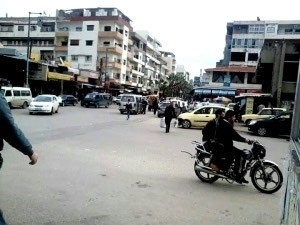 The National Defense Army militias have recently asked a number of merchants and owners in the city of Jableh to pay monthly salaries to the fighters, despite ongoing theft and extortion campaigns already committed by these fighters, who have had the upper hand in the city after the decline of the role of police and security forces.

A member of the Local Coordination Committees in the city of Jableh, Abu Mulham Jablawi, told Inab Baladi newspaper that "the army committees asked the merchants in the city to pay about half a million Syrian Pounds per month as salaries to the militias, because they claim the regime doesn’t pay their salaries any more".

The militias justified the move by saying they are working to protect the merchants, according to Jablawi, who added that "some merchants are cooperating because they fear arrest or confiscation of property".

The decision led some merchants to leave the city. Abu Firas, a food trader, decided to leave the city after he was asked to pay SYP 75,000 per month, fearing arrest becaue he was unable to meet the demand.

Extortion is not only practiced against the merchants of the city. Abu Mohammed, who works in the industrial area, said the National Defense Forces militias entered his shop last Tuesday "and took industrial equipment without paying for them, worth up to 200,000 pounds".

Jablawi said that in an unprecedented phenomenon, nearly 50 houses owned by National Defense Force fighters have been constructed at the expense of the merchants and workers of the city, in addition to the furniture and electrical appliances.

"For sure, the traders are being threatened and detained if they refuse," he said.

These practices have been reflected in the living conditions of the people of the city.

"The practices of the Defense Force militias decreased the living conditions which were already deteriorating, as the price of a gas cylinder has reached 5,000 pounds, and the hours of electricity rations have doubled recently to reach four hours of rationed electricity and two hours of operation. Food and transportation prices also rose as a result of high fuel prices after the government decided to reduce the allocated fuel amount for the province," Jablawi explained.

He added that Lattakia and Tartous are witnessing a new wave of migration towards Turkey, especially from the seaports of the two cities, referring to "the increase in the number of tourist trips from Syria to Mersin from one trip a week to more than four trips, and at a rate of between 300 to 500 passengers each trip".

The committees of National Defense Forces in Jableh are led by Ayat Barakat, who is accused of the killing, arrest and displacement of a large number of people from the city of Jableh, while 14 kidnapped citizens from the city have been missing since months, in addition to dozens of detainees.