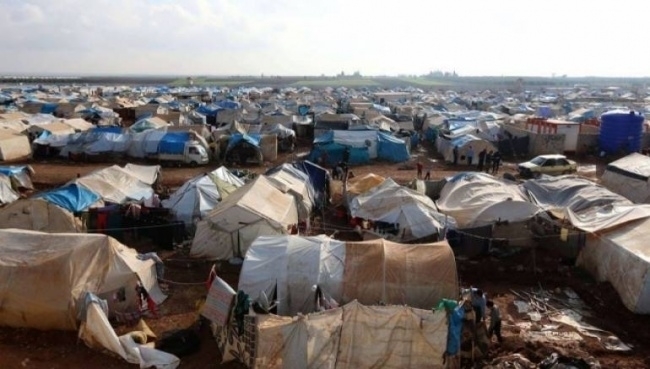 Alarm bells are ringing in the lead up to winter after heavy rain stormed fragile makeshift shelters at Syria’s al-Salamah refugee camp on the Turkish border.

People in the camp are living in inhuman conditions, exacerbated by the winter which already led to death of one child and destroyed more than 500 tents hosting in some cases whole families.

Mohammed al-Naeemi, the Head of Syrian Association for Human Rights has forwarded an invitation via his Facebook account to the head and members of the Syrian National Coalition to go to the camp and spend just one night there to feel the real conditions people live in for themselves. He suggested that people have the right to bring anyone who refused the invitation to trial. "I will be the first one to put myself on trial because I hold as much responsibility," he told Zaman al-Wasl.

Naeemi confirmed that the invitation was serious, as he hoped that spending only one night like displaced people could awaken people’s conscience.

He added that emergency status was announced in the camp after the death of a child and drenching of almost 500 tents.

He explained that the association did not provide any relief to displaced people in general, and at the al-Salamah camp in particular, as it is a legal body concerned with refugee and displaced people’s rights and legal issues all around the world.

"We try to highlight the suffering of refugees and the displaced to human right organization all over the world, besides trying to generate resources and relief through coordinating with aid and relief organizations," he said.

Regarding the delay in dealing with the difficult living conditions of people in refugees’ camps, he explained that they started preparing and securing good conditions for people before winter, but that logistic and administration problems had held them back.

“We had many meetings with opposition figures and with the head of the Coalition in person, but all we got were promises, besides showing a tendency to avoid dealing with the refugees," and matters related to the displaced.

Regarding the aid and relief situation in Syria, the head of Human Rights Association detailed that the Interim Government has two directorates: the Directorate of Palestinian Refugees Affairs, and Directorate of Camps’ Management. Both, he said are not able to cover the needs of refugees and the displaced.

"Despite all that, I met with the Minister of Local Administration, but I could not see any seriousness in dealing with the matter."

Naeemi added that in addition to the humanitarian disaster in al-Salamah camp, there are more than a million refugees and displaced people, where no one can even imagine the quality of life they live, as a family of six has only four blankets, live in worn out tents in a temperature as low as zero, and even some women give birth there.”

“Those people do not have the minimum requirement of even survive.”