ISIS distributed sums of money to poor families in Raqqa, telling people that this money is 'Zakat' collected from the rich of the city 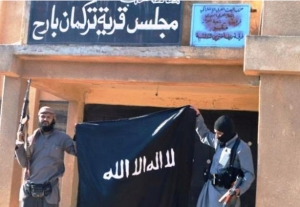 The Islamic State of Iraq and Syria (ISIS) has imposed 'Zakat' tax on merchants and industrialists in the areas under its control in the north-eastern countryside of Aleppo.

The Syrian Observatory for Human Rights said ISIS "has forced the merchants and industrialists to pay 2.5% of each sale."

ISIS distributed sums of money to a number of poor families a few weeks ago in the city of Raqqa and told the people that this money is 'Zakat' collected from the rich of the city.

Furthermore, al-Aan TV said in a report that Zakat was imposed on vegetables and fuel traders. In addition, ISIS has specified the prices for the purchase, sale and rental of kiosks (small buildings made of tin).

One of the traders told Akhbar al-Aan that "ISIS has imposed different fines and conditions on a few small traders in Minbij. ISIS has built a market for vegetables in the public arena in the city, and obliged all of us to work in this market. Now each vegetable seller is forced to pay a monthly rent of SYP 3,500."

No one was exempt from the imposition of fines, said Abu Amin.

"ISIS has imposed Zakat on all the shops. The amount ranges between SYP 10,000 and 80,000 depending on the type and size of the store. In addition, they forced the fuel sellers to pay 200 Syrian Pounds for each barrel that enters the oil market in Minbij, though this oil is bought from ISIS fuel traders in Raqqa and Deir-ez-Zor," he said.