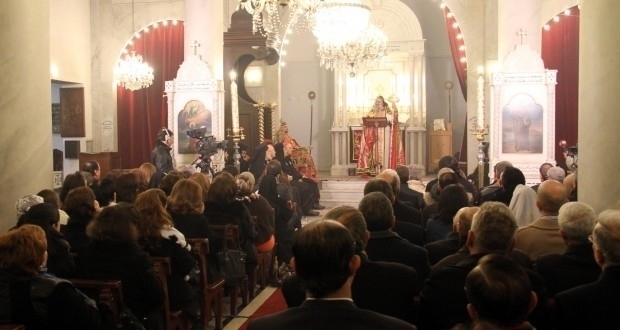 Mass was held on to mark 100 years since the Ottoman genocide of the Assyrians, headed by Patriarch Mor Ignatius Aphrem II, Patriarch of Antioch and All the East Supreme Head of the Universal Syriac Orthodox Church, in Damascus on Sunday.

A number of heads and representatives of several Christian denominations in Syria participated in the mass, which was held at St. George Patriarchal Cathedral. The mass was also attended by Minister of Social Affairs Kinda al-Shammat and members of the Syrian parliament (People’s Assembly).

Patriarch Aphrem II said real martyrdom is the result of defending beliefs and principles, much like the Syrian soldiers defending their country against terrorists, criminals and bandits who hail from all corners of the globe.

The Assyrians and the Syriacs, who have lived in the Damascus area since the first century, were considered alien by the Turkish as they spoke only Syrian and Arabic languages. Aphrem II claimed the genocide committed by the Ottomans aimed to “cleanse” the area of non-Muslim denominations.

His Holiness said that the current situation facing Syria is similar to the Ottoman genocide, with criminals embracing a mentality of rejecting the ‘other’, and the elimination of all those who do not share their ideology.

Translated and edited by The Syrian Observe