Killing and terrorism has nothing to do with heavenly messages, morals or human values, claims clergy 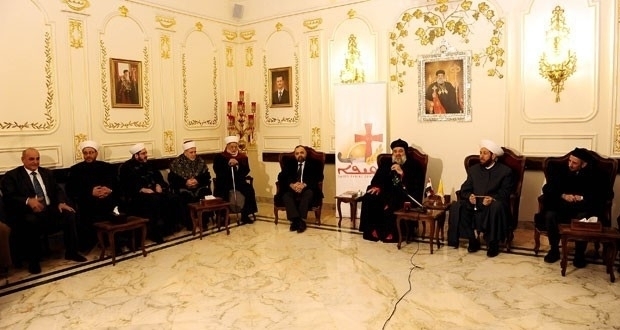 Those who legitimize killing, terrorism or massacres have no claim to heavenly messages, morals or human values, Minister of Religious Endowments, Awqaf Mohammad Abdul-Sattar al-Sayyed, told an audience after visiting the Syriac Orthodox Patriarchate and the Armenian Orthodox Archdiocese.

Marking 100 years since the genocide of Seyfo, in which Ottomans were responsible for the deaths of countless Syriacs and Armenians, al-Sayyed indicated that the genocide proves that what is currently taking place in Syria is at the hands of “neo-Ottomans”.

Sayyed emphasized that what is taking place in Syria is clear evidence that terrorism and criminality should be considered separate from all religions, adding that Islam is innocent of charges of aggression by the West and its allies.

“I congratulate my brothers, my compatriots, on the occasion of the Prophet’s birth and Christmas”, he said. “I wish peace and security will return to Syria, a place which witnessed the birth of the human civilization, and I wish that its people will continue to live as one Syrian family as they always have”.

Aphrem II added, “about half a million of the Syrian Syriacs were killed in those massacres. When we say Syriacs, we means all the Syrian Syriacs – whether in Antioch, Nsaibin, al-Raha, Diyar Bakir, or al-Hassakeh – as they are Syrians, not settlers, and they were martyred at the hands of the Ottoman slaughterers.”

Patriarch Aphrem II stressed that what is taking place in Syria now is not different from what happened 100 years ago.

Primate of the Armenian Church of Damascus, Bishop Armash Nalbandian, said “our message to the whole world, and the Armenians, in this year stresses that the birth of the Armenian nation was in the holy Syria – the country of life, and land of resurrection.”