New massacre east of Damascus, while opposition continues its advance in Daraa 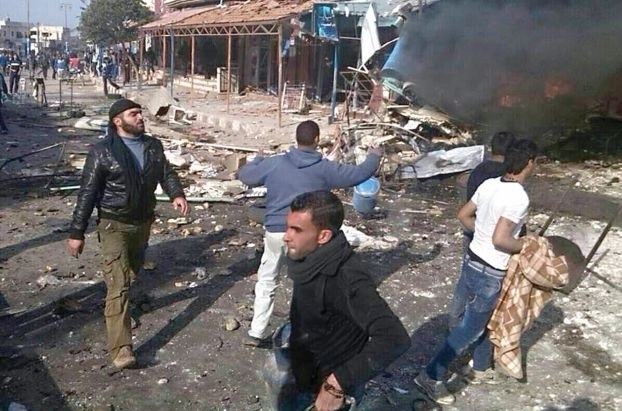 Regime forces have allegedly committed a new massacre in Douma city, east of Damascus, at a time when opposition fighters continue to make progress in the countryside of Daraa between Damascus and Jordan, while clashes continue to rock Aleppo.

Ad-Durar ash-Shamiyah Network reported that the "regime's aircrafts committed a new massacre in the city of Douma, claiming the lives of dozens of civilians". The network claimed that "regime warplanes have launched air-raids on residential neighborhoods in the city of Douma, leading to the death of five people, including three women and a child, injuring many others and destroying homes".

The network said "opposition battalions have tightened their grip on Faron stores and the oxygen plant in the countryside of Daraa during the battle of ‘Victory Comes Only from Allah’ against Assad's forces. The news comes after rebels took control over Battalion 60 and the Engineering Battalion, as well as the towns of al-Faqii, as-Siheliyah, ad-Delli and Tel Delli in the countryside of Daraa, following violent clashes that left dozens of Assad’s forces dead and wounded".

The Syrian Commission for Media explained that the recent period has seen "the significant defeat of Assad's regime and army, especially in the south of Syria, where the formations of the southern front in collaboration with other revolutionary factions have managed to liberate 70 percent of the provinces of Damascus Countryside, Quneitra and Daraa. The regime has lost most of the locations and hardware belonging to the First Army Corp deployed in these areas, considered to be the front lines for war against Israel".

The commission also mentioned the number of regime forces has dropped, from 325,000 to 178,000, amid a "new strategy pursued by the Free Army formations in the fight against Assad's forces, together with field executions carried out by the regime after the loss of any new position".

The commission explained: "The executions of soldiers from the Ninth Brigade in the city of Sanamayn after their withdrawal from Tel al-Hara, in addition to the statement issued by the General Command of Assad's army (which was circulated among pro-regime media agencies after the liberation of Brigade 82 in Sheikh Miskeen) accusing those soldiers of treason and of handing the brigade to the Free Army, all these demonstrate the success of the rebels’ new strategy".

The statement issued by the General Command claimed that "a number of soldiers inside the brigade betrayed their colleagues and facilitated the entry of terrorist groups into the brigade, leading to the death of a number of soldiers, the injury of others, with some of the officers and soldiers captured. The valiant army vows to burn the ground under the feet of these groups, to bring all our soldiers safely to their families, including the dead and wounded".