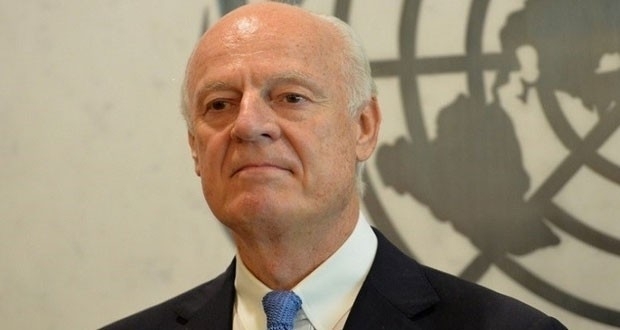 UN Special Envoy to Syria Staffan de Mistura stressed that the Syrians are the only ones who can determine the future of their president, the form of rule in the country and their destiny, calling for respecting Syrian national unity and sovereignty.

“The future of the Syrian government and the form of rule in the country are at the hands of Syrians only,” de Mistura told Sky News TV on Wednesday, calling for a political solution to the crisis in Syria.

President Bashar al-Assad discussed with de Mistura in a positive and constructive manner the new details in de Mistura’s “action plan” on freezing the fighting in Aleppo.

President Assad reiterated Syria’s commitment to supporting any initiative or idea that helps to resolve the crisis and to preserve the lives of citizens and state establishments, while de Mistura voiced hope that all sides would cooperate and support his suggestion on restoring security to Aleppo, as a starting point to restore security and stability to the entirety of Syria.

He confirmed to Sky News that the Syrian government has showed their readiness to stop artillery and air bombardment in Aleppo for six weeks, adding “the opposition forces should also halt their military operations, particularly artillery and rocket shelling”.