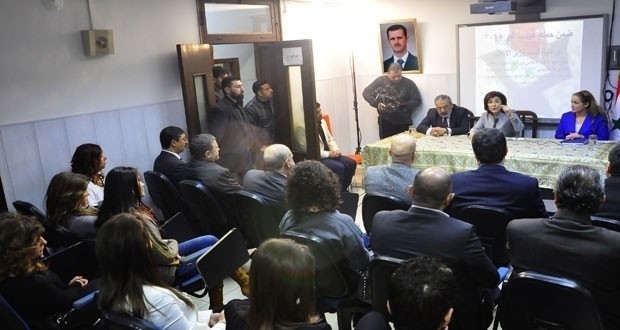 Presidential Political and Media Advisor Bouthaina Shaaban has stressed that making Syria’s voice heard to the world through media is vital to backing up gains by the Syrian army against terrorists on the ground.

Shaaban was speaking during the opening of a training course in talk-show, television and radio presentation carried out by the Media Preparation Institute.

Planned to run throughout 2015, the course will address issues of investigative journalism, body language, TV appearance, journalistic and social media reporting, in addition to issues related to war correspondence and political analysis.

The course was announced as part of the national “Live Syria 2015″ campaign that has since the beginning of this year seen various establishments and institutions making special offers, including big discounts, for citizens to benefit from.

Taking national media to the next level is a must given that one aspect of the internationally devised war waged against Syria is media-related, Shaaban said.

Almost no front has been spared against the Syrian people in the war lasting since 2011, with the media front being among the most important of all.

Hundreds of foreign and Arab media outlets have employed a large-scale campaign where facts on Syria are routinely distorted or fabricated, promoting an extremist mentality, leading many young Arabs to commit to “jihad” in Syria.

Shaaban called for the adoption of new media methods to keep pace with the latest developments in Syrian society spawned by the four-year crisis, noting that top among the issues are laying waste to the takfiri and terrorist mentality while preserving and strengthening social unity.