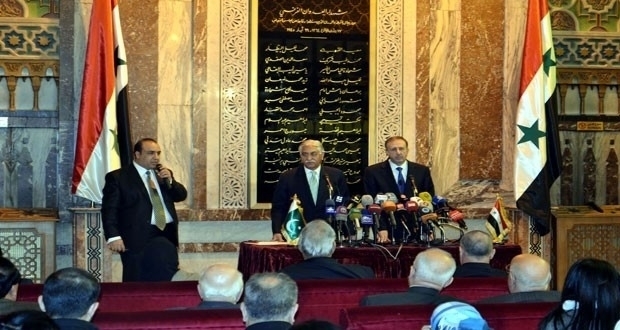 Chairman of the Pakistani Senate Syed Nayyer Hussain Bokhari underlined Pakistan’s support for Syria against terrorism that constitutes a menace to the region and the world.

The Pakistani lawmaker was speaking during a meeting with Speaker of the People’s Assembly Mohammad Jihad al-Laham, shortly after arriving in Syria for a three-day visit.

He stressed the importance of respecting the sovereignty of the Syrian state and assisting it in finding a political solution to the crisis.

"Pakistan, being a UN member state, believes in independent national decisions of member states to reject foreign interference in sovereign countries,” he said, calling for respecting the will of the Syrian people.

He considered that terrorist organizations, mainly ISIS, are tarnishing the image of Islam, adding that Pakistan has long suffered from the scourge of terrorism.

The Pakistani official pointed to stringent measures implemented in his country to prevent the terrorist organization from mounting any attack on the Pakistani soil.

He underlined the large role parliamentarians can play in pushing for political and peaceful solutions to problems, stressing the importance of consultations between friendly countries for public welfare.

Laham said that fighting terrorism is among the public’s foremost priorities, indicating that Syria highly appreciates the stance of friends and their initiatives to assist Syria out of the crisis, citing Pakistan’s efforts to help Syria confront “lethal terrorism”.