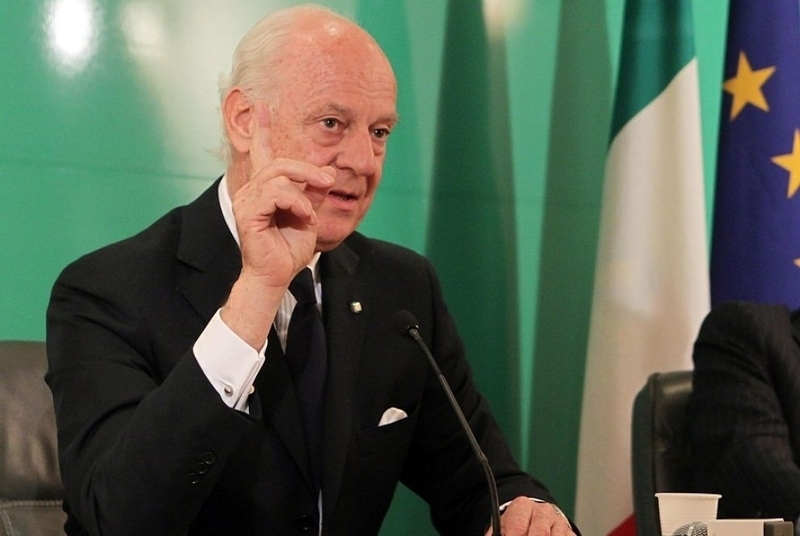 Western diplomatic sources have revealed to al-Hayat that UN Special Envoy for Syria Staffan de Mistura is attempting to secure United Nations Security Council support for his plan to hold bilateral consultations with all local, regional and international parties during the upcoming Geneva peace talks in May. De Mistura is expected to submit a report at the end of the consultations for suggestions on the resumption of negotiations between representatives of the Syrian regime and the opposition.

The sources added that de Mistura attended talks in Washington Sunday to obtain political support for his plan, before briefing the Security Council on his vision in an attempt to acquire backing from the Council’s permanent and non-permanent members. United Nations Secretary-General Ban Ki-moon requested the UN envoy "focus much more to re-launch a political process" since the failure of Geneva negotiations at the beginning of last year. Last year’s  Geneva II negotiations failed when Syrian government delegates insisted on using the forum to discuss the fight against terrorism, while the opposition’s representatives called for a discussion regarding a "transitional governing body with full executive powers". Former UN envoy Lakhdar Brahimi did not succeed in holding parallel negotiations on both topics, after Russia refused to pressure the Assad government's delegation due to ongoing the crisis in Ukraine.

Following de Mistura’s appointment as head of the Syrian delegation last summer, the envoy pushed for an agreement to "freeze” fighting in Aleppo, but the proposal was met with cynicism by Damascus, suggesting instead to “stop the heavy bombardment of Aleppo for six weeks”. The Syrian opposition also refused to meet with the UN envoy, accusing de Mistura of "supporting" the position of the Assad regime and Iran. De Mistura's efforts coincided with the Russian Foreign Ministry's invitation to hold consultative meetings between Syrian government and opposition delegations, with the Syrian National Coalition boycotting participation in the meetings.

According to the sources, de Mistura seeks to "hold a series of bilateral meetings with all concerned parties to discuss the potential for the resumption of the political process". Speaking from Geneva, United Nations spokesman Ahmad Fawzi announced that the UN envoy will begin "separate consultations" later next month. Talks would last between four and six weeks and would be at "mostly ambassadorial level and expert level", Fawzi said.

Fawzi did not give any details on the Syrian parties invited. However, he did explain that the militant groups the Nusra Front and ISIS will not be invited to Geneva, but "that some of those present at the meetings would be able to communicate with them". Fawzi added that invitations would be sent – first and foremost – to the Syrians, followed by regional and international actors.

The plan includes a meeting between de Mistura and his team with representatives from the Syrian government and all major opposition currents – including the National Coalition, the National Coordination Commission for Democratic Change, independent Syrian figures, as well as civil society and business representatives. De Mistura will also hold meetings with the ambassadors of the five permanent members of the Security Council, in addition to representatives of the regional states.

The sources noted that the goal of the meetings is "to discover each party's vision for the political solution and the potential for that to happen now". The talks will focus on two further points: first, combatting the Coalition’s monopoly of the opposition’s representation at Geneva II, with a strategy to expand the representation in May. Secondly, confronting the regime’s refusal to discuss the political process by adhering to the Geneva statement as a reference, taking into account threats that emerged with the rise of ISIS. The sources added that Russia’s previous decision not to pressure Damascus was a concern, but "signals coming from Moscow now indicate it has become more willing to put pressure on the regime to reach a political solution".

Other diplomatic sources pointed to current regional complexities as well as military conflict on the ground, after armed opposition forces recently seized the city of Idleb and the Nasab border crossing with Jordan, engaging in additional battles to advance in the northwest and south of the country; such factors will also need to be addressed during de Mistura's upcoming consultations.

At the conclusion of the consultations, de Mistura is expected to provide UN Secretary-General Ban Ki-moon with a proposal on the possibility of an international-regional conference, in the presence of representatives from all Syrian parties, to discuss the possibility of a political solution in Syria. The conference is likely to coincide with the third anniversary of the Geneva I statement at the end of June 2012.